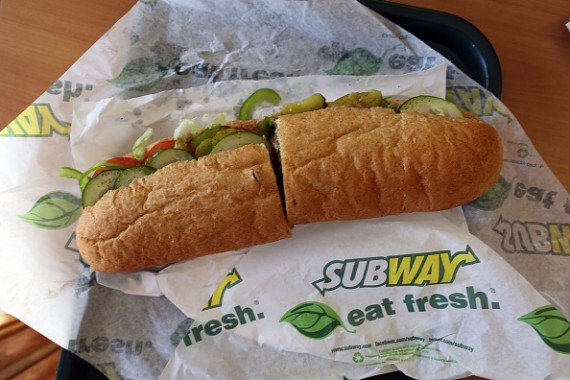 Subway has recently announced the addition of a sandwich with thick cut Carved Turkey to its permanent menu. The sandwich has been made available starting last Monday, and will contain white meat and oven - roasted turkey breast free of artificial ingredients.

"When we were exploring the new thick cut Carved Turkey, we were inspired by not only the strong emotional connection but the versatility of its flavor profile," Chris Martone says, executive chef of SUBWAY® sandwich shops, according to reports from News Channel 10. "The Carved Turkey can be deliciously paired with many of the fresh vegetables on our menu, as well as with our delicious cheeses, sauces, and with the new thick cut Applewood smoked bacon."

Notably, the newly introduced sub will be healthier as it is made with fresh vegetables like spinach. Subway has also introduced Applewood Smoke Bacon Sandwich, for a limited time, which features the crisply sweet Applewood Smoked Bacon topped by Italian Bread, American cheese and fresh vegetables. This newly - introduced limited-edition menu item falls under the Subway Fresh Fit collection, which helps consumers to eat healthily.

Subway plans to make the Curved Turkey free from any added flavors and ingredients. Additionally, by 2017 the Carved Turkey will also be antibiotic free.

The thinly sliced turkey breast of Subway remains on the menu and has not been replaced by the new Carved Turkey sandwiches.