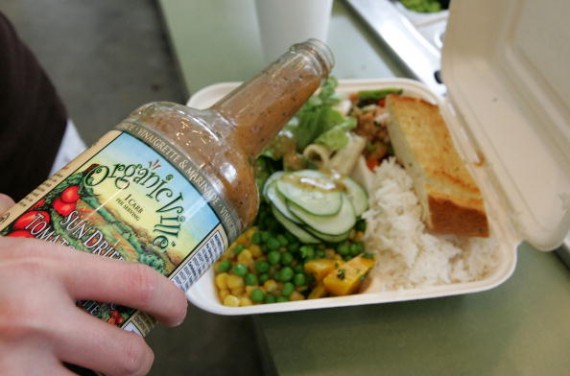 A student at the University of California, Berkeley pours organic salad dressing on a salad made from organic vegetables at UC Berkeley's Crossroads dining commons.
(Photo : Photo by Justin Sullivan/Getty Images)

Vegetarians, with their emphasis on meat-free, low saturated fat and low-cholesterol diet, are considered by many to lead a healthier lifestyle when compared to those who eat meat. However, a recent study came up with a startling conclusion, saying that vegetarians are actually unhealthier and even led a lower quality life.

The highly controversial study was done by the Medical University of Graz in Austria and concludes that, based on the data obtained, the vegetarian diet seems to increase the risk of allergies, cancers and even mental issues such as anxiety and depression according to the Independent. This is a totally unexpected finding because vegetarians generally eat foods deemed to be healthier such as higher fruit and vegetable intake, whole-grain products and its avoidance of saturated fat and cholesterol.

The recent study's data was obtained from the Austrian Health Interview Survey involving 1,320 participants who provided their lifestyle and dietary habits including sex, age and socioeconomic status. The 1,320 subjects were comprised of 330 vegetarians, 330 meat-eaters but also had a lot fruit and vegetable intake, 300 normal eaters with minimal meat in their diet and 330 participants who described their diets as meat-heavy.

The researchers made the following findings:

1.       While vegetarians consumed lesser amounts of alcohol, they were also poorer in terms of physical and mental health as evidence by a higher rate of asthma, allergies, cancer, migraine, anxiety and depression.

This is indeed a controversial claim because vegetarianism is currently viewed by many to be the ultimate healthy diet with its sacrifice of not eating delicious but nutritionally sinful meat. Researchers concede that the study is too small and suggest further studies need to be done to firmly establish their observations. In addition, the study lacks in depth as it also failed to explain the reason behind the observed data which run counter to what people expected.

However, even experts warn that being vegetarian is not the silver bullet that could solve health related concerns. In fact, a purely vegetarian diet could be dangerous because it could expose dieters to possible nutritional deficiencies due to their complete avoidance of meat and meat products according to Authority Nutrition. For nutritional experts, a nutritionally balanced diet that does not forbid a single food group is still the best bet.