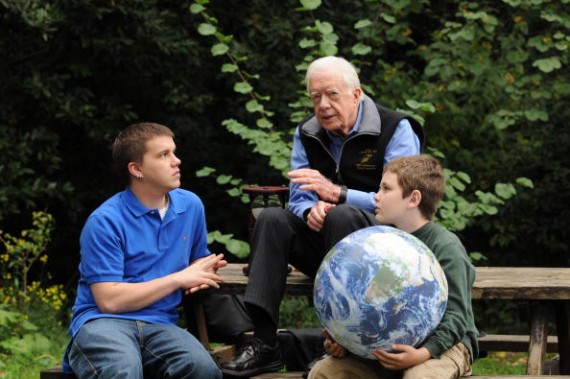 By now, everyone is probably aware that rising global temperatures could result in rising sea levels due to the melting of glaciers and polar ice caps. However, scientists realized that climate change might have a previously overlooked effect on humans - the planet's heating up might make us even fatter.

Recently, the U.S. Global Change Research Program released a report predicting the possible consequences rising CO2 levels may have on global food supply in terms of quality and nutrition. Surprisingly, the report made a startling conclusion that if CO2 levels continue to rise at current projected rates, produce from plants would contain lower proteins and micronutrients but higher in carbohydrates, reports YahooNews.

This conclusion is particularly troubling given the current obesity levels. If people were to eat the same amount of plant based food, it would mean that by 2100, the changes in the plant's nutrients would result in an increase in cases of malnutrition as well as micronutrient defiecients even with the same amount of food intake.

On the other hand, if the future population would increase their food intake to meet the amount of micronutrients needed by the body, it would result in a more pronounced increase in obesity levels. This is because of the high carbohydrates content of plant-based food in the future.

Apparently, the link between CO2 levels and nutrients in plants is a well-documented one. USDA plant biologist Lewis Ziska confirmed that the agency expects that more than 90 percent of plants will likely see a rise in carb content with a corresponding fall in protein and other nutrients.

However, Ziska has some good news, or probably slightly bad news is the better term to use, saying that corn, sorghum and legumes may not see such as a sharp decline in protein content when compared to other plant species due to the different photosynthetic process involved.

However, there is another trend long observed by scientists that is not related to global warming. Numerous studies have concluded that in the past sixty years or so, fruits and vegetables have been steadily declining in nutritional content. For example, a study by University of Texas biochemist Donald Davis observed that when crops from 1950 and 2009 were compared, vitamin C content decreased by 15 percent, iron by 15 percent, vitamin B2 content declined by a whopping 38 percent, calcium by 16 percent, protein by 6 percent and phosphorous decrease by 9 percent. Modern farming methods, with its emphasis on productivity leaving farmlands with low soil quality were blamed for the drastic decrease in a nutritional content of the crops.

It looks like scientists will have their hands full in trying to find ways to address the decreasing nutritional value of crops brought by climate change and commercial farming methods.

4 Surprising Foods That Cause Bad Breath