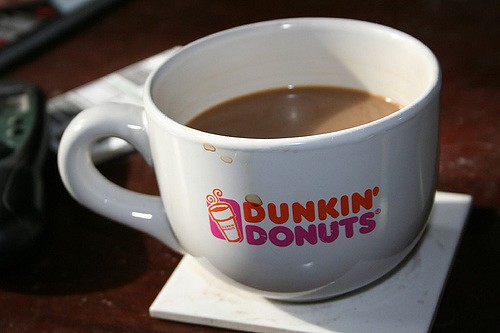 Dunkin' Donuts' new loyalty program is perfectly timed to take advantage of disgruntled Starbucks customers who are unhappy with the changes Starbucks imposed. Comparatively, Dunkin' customers will need to spend considerably lesser than their Starbucks counterpart to get a freebie.

Dunkin' Donuts recently launched its new loyalty program, just when Starbucks' own is under fire due to the changes it recently introduced. Unlike previous terms, Starbucks is now focused on the amount spent rather than the number of visits. As a result, it would appear that Dunkin' Donuts customers are way ahead in terms of points and redeemable items, reports Time Magazine.

Dunkin' Brands Group Inc CEO Nigel Travis said that they are actually excited about Starbucks' decision to change the terms of its loyalty program. Late last month, Starbucks made surprising changes to its loyalty reward program which now makes it harder for customers to earn freebies from the company. Angry Starbucks customers could be a good thing to Dunkin' Donut's business since this makes it possible for Dunkin' Donuts and other Starbucks rivals to target these angry customers.

Under the new Dunkin' loyalty rewards program, Dunkin customers will only need to spend $40 to get their first freebie. This is significantly less than what Starbucks customers need to spend to get their own free treat which is estimated to be at $62.50. If this clear advantage in terms of loyalty reward scheme is not enough to convince Starbucks customer to jump ship, maybe the enticing $5 gift card, which Dunkin' plans to give away selectively will be the deal clincher.

And Dunkin' is even set to challenge Starbucks' dominance in terms of app-based sales. The company now offers an upgraded version of their app which carries new features like the capability of customers paying with the use of a virtual card according to Fortune. Ordering via the new Dunkin' app is even more appealing because it makes it easier to earn a point under the DD perks program.

Starbucks is probably not going to sit this one out. It looks like the battle over hot coffee is brewing even hotter.