Beer And Weight Loss? Find Out Other Health Benefits Of Beer Drinking 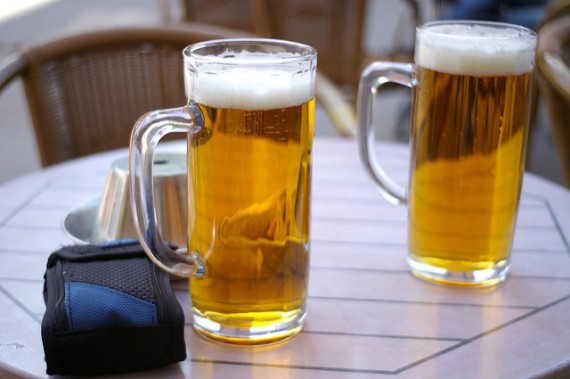 Scientists say a compound in beer could help one stay slimmer.
(Photo : Photo by Robin/Flickr CC)

Beer has been known for lot of health benefits but promoting weight loss is probably not one of them. Yet, researchers recently concluded that beer may actually help people loss weight.

Researchers say that xanthohumol, a flavonoid in hops and therefore also found in beer, can help in weight loss, reports FoxNews. This recent discovery, according to the researchers, could pave a new approach to solving the obesity problem gripping the nation.

The researchers found additional health benefits of xanthohumol as well. Apparently, the flavonoid can also lower cholesterol and even lower blood-sugar levels.

Sounds confusing and counter intuitive, doesn't it? After all, beer is usually the first to go when doctors start eliminating food items due to high blood sugar levels. One is right to suspect that beer might not make one loss weight or even lower blood sugar levels because of its high carb content.

Actually researchers say that the levels of xanthohumol found in beer are so minute that one needs to drink a whopping 3,500 pints of beer a day to experience xanthohumol's slimming effect. Instead, scientists are looking at the option of taking xanthohumol as a supplement to get the desired amount without the unwanted calories associated with beer drinking.

But beer lovers should not worry too much; beer offers plenty of other health benefits. For example, Men's Health cites an Italian study that found beer to be a heart-healthy drink. Moderate beer drinkers had 42 percent lower heart disease risk compared to non drinkers. But the key word here is moderate which, according to scientists, should mean one pint a day at 5 percent alcohol.

Another compelling reason to drink a brew or two is that beer can actually enhance one's creativity. A not-so-sober study show that beer drinking men solved verbal puzzles faster than the beer-free group.

If one still needs a little more convincing to take up the beer habit, this one might just prove to be the clincher. Beer actually has anti-aging properties, according to Organics Facts. Apparently, beer magnifies the effect of vitamin E, a major antioxidant in the body, which is also a factor of keeping the skin supple and young looking.

So the next time one meets one's beer-drinking friends who look healthier and younger, blame it on the beer.