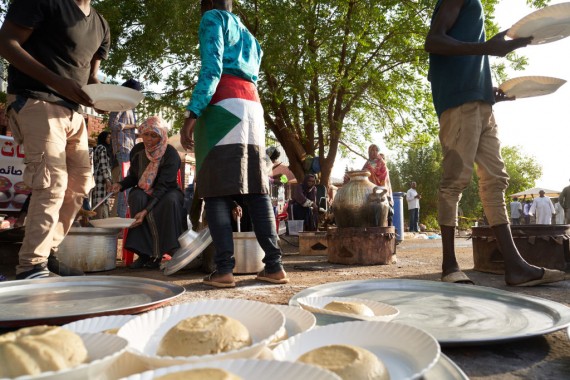 KHARTOUM, SUDAN - MAY 07: A tent of protesters helps cook and distribute food for the iftar meal on May 07, 2019 in Khartoum, Sudan. (Photo by David Degner/Getty Images)
(Photo : Getty Images)

With a global pandemic going around in all parts of the world, some countries are facing severe food shortages. Starvation and hunger is a constant global issue, and with the pandemic, the situation got worse.

Sudan is one of the countries that suffered severe hunger. Nearly a quarter of the country's population is going hungry, as prices have inflated since the pandemic began.

In recent reports, about 9.6 million people in Sudan are suffering food shortages. It is the highest record that the country has ever had in history.

Most people affected by food shortages are those who live in areas where there are conflicts. Regions like the South Kordofan and the Blue Nile State are profoundly affected by the problem. Overall, 18 states of Sudan have confirmed a high alert level of starvation, including the country's capital, Khartoum.

According to the Famine Early Warning Systems Network, the country will need more emergency food assistance up to September. Since the level of food shortage and hunger in the country is very intense, people can die of starvation.

The act of UN agencies

The main reason why starvation is very high in Sudan is because of the spike in staple food prices. Due to COVID-19 safety measures, people have limited access to food as well.

United Nations agencies and organizations are looking into means to help Sudan's food shortage problem. UN officials in the country warned if there will be no actions taken regarding the food problem, people will face even worst conditions in the future.

World Food Programme communications officer Woo Jung Kim stated that food insecurity is widely spreading across the country. The economy is declining, and prices are continuously increasing. The economic decline also has deprived the purchasing power of citizens.

The UN also gave out a warning that food might not get into all of Sudan's states because of certain COVID-19 restrictions. According to the UN, they are also having a hard time getting a visa or permission passes to travel and send out food to Sudan.

Regarding COVID-19 cases in the country, the World Health Organization (WHO) reported over 11,424 cases and 720 deaths in Sudan.

People in Sudan barely get to eat proper meals a day. According to the Guardian, they interviewed a tea seller from the southern part of Kordofan.

The tea seller, Buthiana el-Nour, said she had to reduce her work hours because of the COVID-19 security measures in town. With that, she struggles to buy food for her family, given she only has a small amount of time to purchase.

el-Nour also revealed she could not stay long inside the market because armed men are everywhere. She is afraid they will rob her, or worse, kill her. Moreover, el-Nour is not the only one suffering this suffocating situation.

People in Sudan get to have only one meal per day, and the government is not giving out assistance. Most of them are only left to be thankful because they are alive.

Another woman from the northern part of Kordofan, Wisal Abu-Sham, also shared her starvation struggle. Wisal and her husband have a farm in a village called Um-Jab, and they have 13 children.

According to Wisal, she has been struggling to feed her whole family, because the farm is dry and harvest is low. She also admits they are eating sesame seeds and sorghum instead since there's no rain yet to bring their plants to life.

ALSO READ: Salmonella outbreak increases in the US