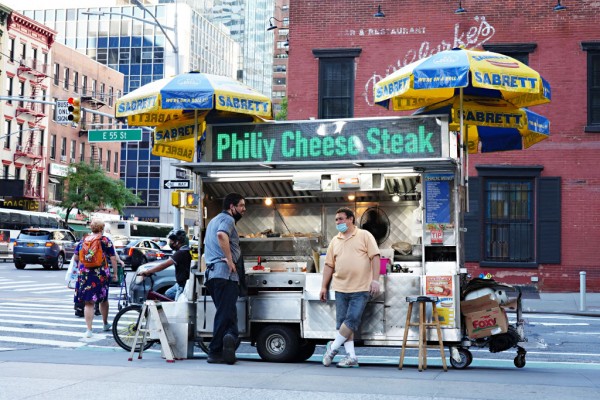 (Photo : Cindy Ord)
Two venders wear protective masks while standing next to a food cart as the city continues Phase 4 of re-opening following restrictions imposed to slow the spread of coronavirus on August 18, 2020 in New York City. The fourth phase allows outdoor arts and entertainment, sporting events without fans and media production.

Snacks are loved by people from all over the world, but did you know that ancient Romans love them too? Thaw was demonstrated by an unearthed Pompeii food cart.

Considering the great history of the world, Romans built quite an impression across the globe. Even disasters from ancient times were recorded by some of the experts just like what happened to Pompeii.

According to Britannica, Pompeii is an Italian city that was showered by volcanic debris when Mount Vesuvius erupted back in 79 CE. Because of this, life and some of the artifacts went underground waiting to be excavated to reveal how their life once rose in the city.

The New York Post reports that an unearthed artifact from the civilization buried by the volcanic eruption describes what ancient Romans love to eat for snacks.

The Unfold Times shares that the portion of the road vendor counter was dug up as part of the effort to shore up the crumbling ruins of Pompeii, which then reveals a multi-sided counter with broad holes with deep vessels for warm meals, a perfect complimentary of the modern-day salad bar.

The Guardian adds that the archaeologists discover several still life scenes such as depictions of animals believed to be in the menu of the food stall such as mallard ducks and rooster, for serving with wine or hot beverages.

DNYUZ notes what Pompeii Anthropologist Valeria Amoretti shares with them about the duck bone fragment in one of the containers along with fragments of fish, pigs, snails, and goats. They dd that a wine container also contains the debris of ground fava beans which is known to be added to ancient vino for flavor and coloring.

The guardian also takes note of what Osanna shares with Ansa news saying that the counter seems to be closed in a hurry and was abandoned by the stall owners and the option that the oldest man stayed behind and perished during the first phase of the flareup.

Osanna adds in the New York Post that the food remains to demonstrate what is popular with common folks stressing the street food is not frequented by the Roman elite.

The Guardian reports that along with the thermapolium, a water tower and a fountain were also exposed together with human remains including a man experts believe to be about 50 and was discovered near a child's bed.

The New York Post adds that a bronze ladle and nine amphorae which was a famous food container among Romans during those times, a ceramic oil container, and a couple of flasks were also discovered by the excavators.

Discoveries like the Pompeii Food Cart is vital because it indicates how ancient people live and eat for snacks and meals. This is an indication that the food industry has a long history to share with the next generation.