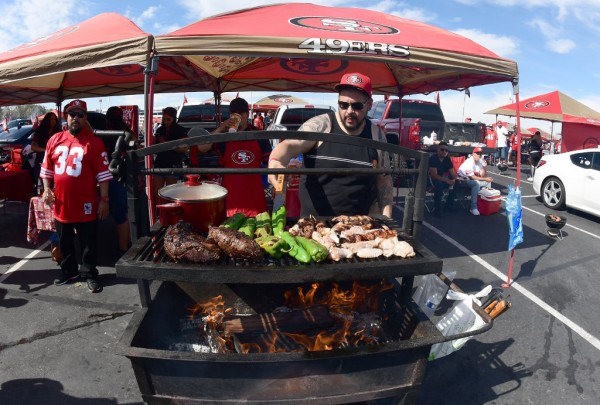 (Photo : Thearon W. Henderson)
an Francisco 49ers fans tailgating and barbecuing in the parking lot prior to the start of an NFL football game against the Pittsburgh Steelers at Levi's Stadium on September 22, 2019 in Santa Clara, California.

Barbecue is one of the tastiest delicacies that an individual can get a hold of in the United States. Usually, Texas pops in our head when we talk about barbecue because of the famous Texas Barbecue. BBQ spots that serve a lump of meat that suits your palate are challenging. But did you know that barbecue spots do not only exist in Texas, but since we are in 2021, more and more restaurants that offer barbecue are all over the United States.

According to Live Science references Planet Barbecue, cooking barbecues are invented by the Homo Erectus when they began cooking meat utilizing fire about 1.8 million years ago. Surpassing time and different eras, barbecue deserves the patronage and love it receives from people of other races worldwide.

Suppose you were headed on vacation and you decided to dine out, and you are having a hard time deciding on what Barbecue place in the United States to go to. We got your back. Here are the best barbecue spots across the United States.

Love Food shares that regularly, this restaurant makes people fall in line even before they open and reviewers of this restaurant that their food is worth the wait. Love Food notes that they offer ribs, grits, and of course, brisket, reminding that you should be early because their popular menu items run out immediately.

Business Insider mentions that this joint temporarily operates as a catering business since an arson fire set their spot ablaze. They note that the catering service (temporarily) offers a flavorful brisket partnered with mac 'n cheese to give it a finishing blow of deliciousness.

Mac 'n cheese goes well with a juice barbecue, and who would disagree. The Thrillist shares that this barbecue place is one of the 300 of the best barbecue places in the United States that features quality beef ribs and Kansas City style cheesy corn bake.

Love Foods notes that Connecticut is not known for its barbecue but, Hoodoo Brown Barbecue was featured in Cooking Channel's Man Fire Food because of the food they offer and, of course it's delicious taste. They add that this restaurant provides their Hogzilla, their signature sandwich that encompasses pork ribs, pulled pork, and pork belly topped with their Hoodoo Voodoo Sauce and fried green tomatoes.

This 2021, if you happen to see yourself wandering in these places, try these barbecue spots in the United States that will surely melt your heart and fill your stomach with goodness. But, remember to eat moderately to enjoy them once again.

Related article: Major Barbecue Styles in the US: Where Can You Try Them

WATCH: Why Texans Call This The Best BBQ spot in Dallas from Food Insider