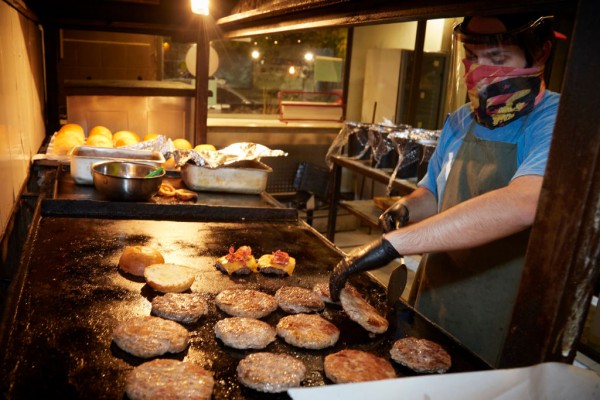 (Photo : Alexis Lloret)
A grill cook wearing a face shield and gloves flips burgers on May 28, 2020 in Mendoza, Argentina. Bars, restaurants and coffee shops are allowed to reopen in Mendoza as the province eases measures against coronavirus and seeks reactivation of the economy.

The convenience and time-saving ability of fast-food restaurants give them an advantage over any restaurant that takes time to serve a perfect meal, whether at what time of the day you entered the establishment for a meal.

In addition, the foods that are usually offered on fast-food menus are on-the-go. Fast-food restaurants are now rampant and are very evident state of Hawaii.

According to Colby Community, what makes the fast-food have a firm grip on a large part of the American Food economy is because of the convenience fast-food chains offer. Many people find that attractive about them. They add that fast food advertisements are also anchored on this aspect to maintain their overwhelming presence in society.

Eat This Not That mentions that the Aloha State ranks 40th in population with about 1,416,000 residents, which was noted by the United States Census Bureau.

Yahoo! Life furthers that Hawaii has 97.5 fast food locations per 100,000 residents, which they interpreted to one McDonald's, Subway, Taco Bell, and other fast-food outlets per 1,025 people who is the resident of the state.

However, although the Pacific island state has the highest per capita income, it does not mean that that Hawaii has the most fast-food restaurants in the whole United States.

How did it happen?

Yahoo! Life points out that the reason why Hawaii became the top among other states is the concentrations of certain fast-food brands and a wide variety of present in smaller numbers. They add that other states high concentration of some fast-food restaurants but few or even zero locations of other brands.

Only one state comes close to Hawaii's record of concentration when it comes to the fast-food chain, and that is New York garnering 92.3 fast-food restaurants per 100,000 residents. Imagine the concentration of fast food in these states that they will be present wherever you look.

Given this situation, America's Health ranking of 2020 notes in Yahoo! Life that Hawaii has a low occurrence of obesity compared to other states in the United States. They note that fast-food chains may be situated in Hawaii for tourists who would like to eat something they already know of apart from their local delicacies.

Although Hawaii is known as the present fast-food capital in the United States, it is surprising that obesity doe not usually occur in their area. So next time that you visit Hawaii, you may now be sure that you can still eat your favorite fast-food menu item since fast-food giants may also be present in the state.

Related article: Post-Pandemic Fast-Food Trends To Look Out For

WATCH: Where You Must Eat in Hawaii from Honeysuckle