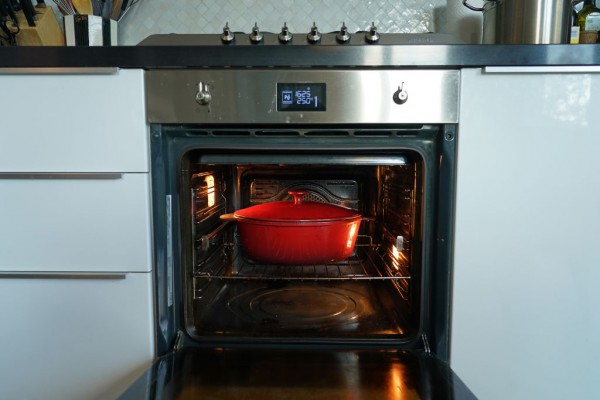 (Photo : Sean Gallup)
A loaf of bread prepares to bake by the photographer in a cast-iron pot in the kitchen oven of his apartment on the 2nd day of his 14-day quarantine at home during the second wave of the coronavirus pandemic on October 29, 2020 in Berlin, Germany.

Skillet or pan cookware is essential to homemakers since it will be their best friend in the kitchen for a long time. The cooking wares in your kitchen might be picked based on their durability and versatility. One thing that every American kitchen would have is a cast iron, whether it's a skillet, pan, or a Dutch oven, where you use it both on your stovetop and oven or oven to stovetop.

According to Britannica, a cast iron is an alloy of iron that encompasses two to four percent of carbon and other minerals and is made by reducing iron ore in a blast furnace.

Serious Eats notes that most households use the skillet in searing steaks or as a baking pan. But because you are not perfect, you might have wronged the cooking ware at some point. Here are the reasons you are using your cast iron the wrong way to give you an idea.

Read also: 7 Ways You're Shortening the Life of Your Non-Stick Pan

You did not season your pan

Seasoning is not only for home-cooked meals. Cast iron needs some seasoning too. According to Food & Wine, seasoning the cast iron is essential when you use it for the first time. Popular Science shares that cast iron (whether skillet, pan, or Dutch oven) is highly reactive to liquid with its robust and durable structure.

They add that a droplet of water is left sitting in the skillet; that is why you need to oil the inside and outside of the cast iron and then heat it until it polymerizes and makes a protective layer.

You wash them using a dishwasher

Although it makes your work easier, cast iron is not advisable to be washed on the dishwasher. The reason is straightforward; Domain explains that the dishwasher can cause your cast iron to rust alongside removing the protective layer or the seasoning you place on it. They recommend rinsing the cast iron skillet with hot water and utilizing a sponge to remove the food that sticks while you seared that steak.

You slide them regularly in the glass top stove

Cast iron is very versatile that you can even use it on top of the glass top stove. Stone Frying Pans remind that the only thing you put into mind is to not slide them because the weight of the cookware will scratch and damage the surface or even crack the stovetop, causing you another dollar.

Eat This Not That shares that scrubbing your cast iron with steel wool is not healthy for it. Instead, they recommend using one cup of kosher and non-iodized salt as an alternative and using a kitchen towel to scrub it around. They remind putting the salt in a heatproof bowl before throwing them away to the bins and causing trouble.

You're not using them regularly

Using your cast iron regularly will make them perform better and sturdier. According to Michigan State University, every time you cook on the cast iron, you season them. That is why it will be sturdier and more efficient.

Cast irons are very versatile that you can cook a lot of food in them. Taking care of them will make the cast iron last for a long time and serve as a family heirloom to the next generation.

WATCH: How To Cook With Cast Iron from Tasty