Post-Natal Depression: Are New Dads at Risk as Well?

In a recent study, it was found by researchers that the anxiety that is felt upon the arrival of the newborn baby is as common as the postnatal depression, and the risks for men are nearly as high as for women.

Dr. Liana Leach, a mental health researcher  from The Australian National University (ANU) Centre for Ageing, Health and Wellbeing, has studied 43 separate cases and as soon as her findings were out, it showed that anxiety before and after a child arrives is just as prevalent as depression, that affects around one in ten men, which is approximately half of the rate for women.

And due to the fact that pregnancy and childbirth are so integrally associated to the mother, it creates a sensation for men that they are being left out during the process. 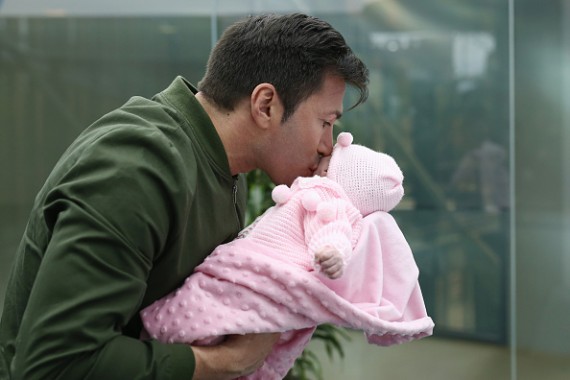 As reported by Medical News Today, Dr. Leach said that anxiety can only be a problem when it persists for extended periods and interferes with every day functioning, but generally, having a new baby is a time of great adjustment for many parents, and it is just normal to be nervous.

Worrying or feeling nervous and exited much of the time, being irritable, and fears for the baby's safety are just some of the intrinsic symptoms of anxiety. But, for the extrinsic and visible symptoms, it includes but not limited to a racing heart, poor sleep, feeling sweaty, and poor appetite.

From the time that the woman finds out of her pregnancy, couples should already be made aware of their mental health right. And in order to lessen the severity and span of symptoms, early intervention is one factor that a couple should consider.

Some of the commonly known risk factors include lack of social support from family and friends, especially from an individual's partner, financial challenges and as well as a history of mental health problems.

As Dr. Leach have strongly noted, perinatal period should not only be for the mother but should be a health care for the whole family as well.