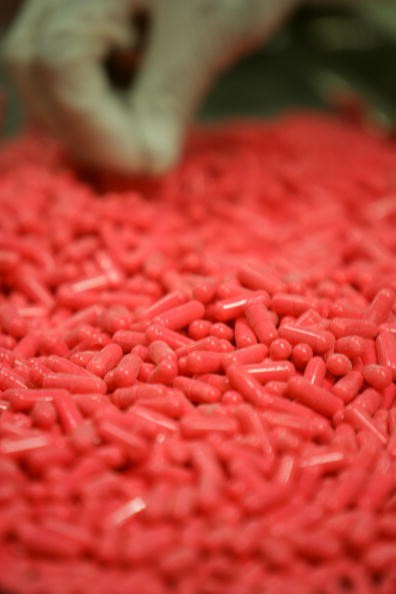 BEIT HANOUN, GAZA STRIP - SEPTEMBER 08: A worker inspects capsules at the Middle East Company for Pharmaceutical Industries September 08, 2008 in Bait Hanoun, Gaza Strip. Constructed in 1999, the factory is said to be the only producer of pharmaceuticals in Gaza Strip. It's currently using only one production line due to the lack of raw materials because of a trade embargo with Israel.
(Photo : (Photo by Abid Katib/Getty Images))

What if a person can use 100 percent of the brain's full potential? Can the world finally see the first breed of superhuman? Recently, a smart drug is being sold commercially dubbed as the "Viagra of the Brain" because the makers claim that their drug can unlock the brain's 100 percent potential.

Mankind is known to harness only 10 percent of the brain's full potential. The brain is about 3.3 pounds or 25 kilograms composed of 86 billion nerve cells. According to science, the rest of the brain's capabilities remain a mystery. If found true and effective, the "smart pill' by Synapsyl is about to change the world.

According to reports the use of Synapsyl " has skyrocketed on college campuses across the US, Silicon Valley, Wall Street, and professional athletes since coming back on the market in April. It's being touted as an Adderall replacement, and many students are taking full advantage of its availability to buy online without a prescription.".

Synapsyl claims that their drug can increase energy, maintain focus and boost brain performance. From their website, they said that by using their drug, the individual can unlock the brains 100 percent full potential.

Although it's hard to picture how a man who uses would 100 percent of the brain will look like, there are a lot of claims that say this drug actually improves brain performance. The movie Limitless described a person with increased brain power. Some people wonder if they can achieve the same level of intelligence by using Synapsyl.

Aside from students seeking memory enhancers, this smart drug has also been very popular with athletes and businessmen. "My ability to think and focus more than doubled when I was able to buy Synapsyl again. The pill's return prevented me from dropping out of college," a student told SecretBrain.com.

It prompted one of their editors to get to try the drug and these were his findings (shortened):

The mental fog and stress I'd been carrying around vanished instantly. Soon, I reached a level of alertness and concentration I'd never experienced before. Sounds didn't even register. It was like walking around on a winter day after it just snowed. It became easy for me to ignore distractions and outside noises. Best of all, there weren't any of the negative side effects like I get when taking Adderall.

Synapsyl improved my ability to focus and function, and I made absolutely no change to my diet, exercise or work schedule. My results came from only taking Synapsyl.

Synapsyl has me laser-focused on the job at hand, and I am suddenly able to get things done before I move on. I noticed throughout the week I was hardly ever stressed, and I was able to control my emotions without losing focus. I expected to run out of steam around the third week due to my body getting used to the ingredients. But my energy levels haven't dipped at all.

I was given the nickname "Superman" at the office, as I've become the most productive member of the staff. I give all the credit to Synapsyl. My mind is crystal clear and I'm able to recall stored memories with near perfect accuracy. It's not like I became a genius overnight after taking Synapsyl, but it's definitely improved my memory and the speed at which I process new information.

Synapsyl makers said the secret behind the drug is by improving the brain's neurotransmitters. The pill can be bought online through their website and can be purchased even without a prescription, it also comes with a 30-day money back guarantee. So if you want to be "Superman" you might want to use the "Viagra for the brains" while nothing prohibits anyone from taking this drug just yet.