Here's How To Survive New York Without Buying Food 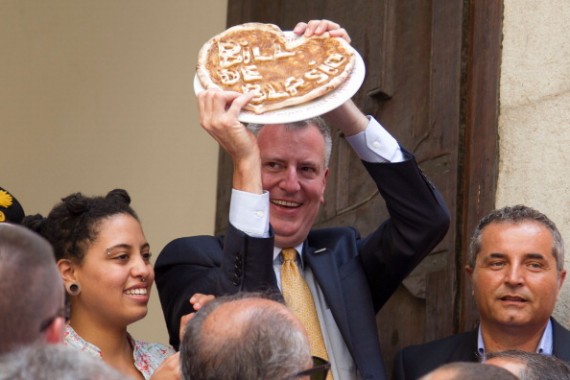 SANT'AGATA DE' GOTI, ITALY - JULY 23: New York City mayor Bill De Blasio and his family holds a pizza with hi name on it as he visits the town his grandfather Giovanni de Blasio was born on July 23, 2014 in Sant'Agata de' Goti, Italy. The New York City mayor and his family are on a eight-day holiday in Italy but de Blasio plans to meet with Italys foreign minister, Federica Mogherini, and with Pietro Parolin, the Holy Sees secretary of state.
(Photo : (Photo by Giovanni Marino/Getty Images))

Comedian and filmmaker Jeff Seal spent four nights in New York City looking for food, in the garbage! Equipped with just gloves and a headlamp, he proved that a person can survive in NYC without having to buy food.

In his Youtube video, he documented the things he had to do to get good and edible food from the trash. Surprisingly, it looks like it wasn't that hard. From the video, you can see that the choices are not limited to gross food. There was gourmet food in perfectly locked packaging looking fit for consumption. He said,  "I actually got a ton more food than what is in the final video-I had to cut out a lot because it was getting boring and repetitive watching me endlessly pull different types of perfectly good food out of the garbage.".

Every year food wastes amounting to billions of dollars have been thrown out of the window. That's why there are a lot of initiative to donate unsold food to the less fortunate instead of throwing them away.

For scavengers, the arrival of dump trucks means Christmas. And that what Jeff got to experience. In the course of his "scavenging", he found perfectly good food which isn't even expired yet! Aside from grocery food items, he was able to score some gourmet bread as well.

With a new batch of trash more and more food was salvaged. There was supermarket food, set meal complete with rice, whole loaf bread and much more. It's hard to think how this way of life has been going on knowing that there are a lot of people who are hungry every day.

Seal also offered some "garbage etiquette" like cleaning up after you scavenged.

In the end, Seal managed to get a lot of edible food, perfectly sealed and still within their period of freshness. He collected them not for him and his staff to enjoy, but they donated the goods to charity. Seal said, "You know you're living in abundance when you can throw away food that someone else threw away." Don't call it "dumpster diving"; call it "Locally-Sourced Reclaimed Food Curation.".

The point of his documentary is not just to prove there is edible food in the trash, but it is also a call for everyone to patronize the food donation drive and to avoid throwing away food. In doing so, the world can prevent food wastage and help feed the needy at the same time.