Mass Adoption Of Veganism May Save 8 Million Lives By 2050, Study Says 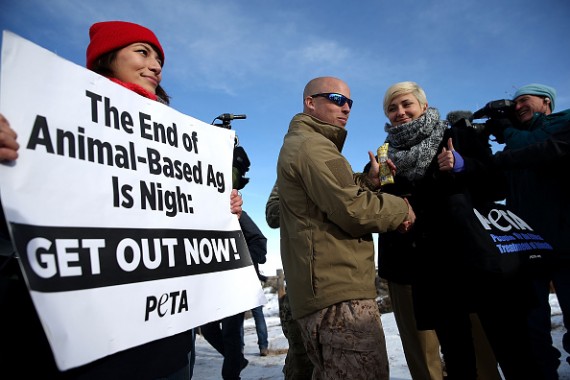 BURNS, OR - JANUARY 06: Lindsay Rajt (R) of PETA poses for a photo with a member of an anti-government militia after donating vegan jerky snacks oustide of the Malheur National Wildlife Refuge Headquarters on January 6, 2016 near Burns, Oregon. An armed anti-government militia group continues to occupy the Malheur National Wildlife Headquarters as they protest the jailing of two ranchers for arson.
(Photo : Photo by Justin Sullivan/Getty Images)

Some celebrities have been spreading the gospel of vegetarianism for some time. Now, they have scientific evidence on their side.

According to Fox News, a team from the Oxford Martin School, who outlined their findings in a study published in the Proceedings of National Academy Sciences, also claimed that cutting down on meat could lead to global savings of £1.5 trillion in climate-related damages.

According to the researchers, global adoption of meat-free or meat-reduced diets could: help avoid 5.1 million deaths by 2050, a number that goes up to 7.3 million for a vegetarian diet and 8.1 million for a vegan diet, reduce greenhouse gases by two-thirds,cut food-related emissions by 29 percent -- 63 percent for a vegetarian diet and 70 percent for a vegan diet , and save around £500 million in healthcare, unpaid informal care and lost working days.

Lead researcher Marco Springmann said that what we eat "greatly influences our personal health and the global environment". He suggested that diets containing a poor ratio of vegetables to meat were responsible for "the greatest health burden globally"

"At the same time the food system is also responsible for more than a quarter of all greenhouse gas emissions, and, therefore, a major driver of climate change," he said.

Wired reports that while putting a "dollar value on good health and the environment is a sensitive issue", Springmann suggested that the results indicated how "dietary changes could have large benefits to society".

"The value of those benefits makes a strong case for increased public and private spending on programmes aimed to achieve healthier and more environmentally sustainable diets," he said.

Other studies have had similar findings. In 2012, researchers from the University of Exeter found that cutting global meat consumption in half could "significantly lower carbon dioxide levels".