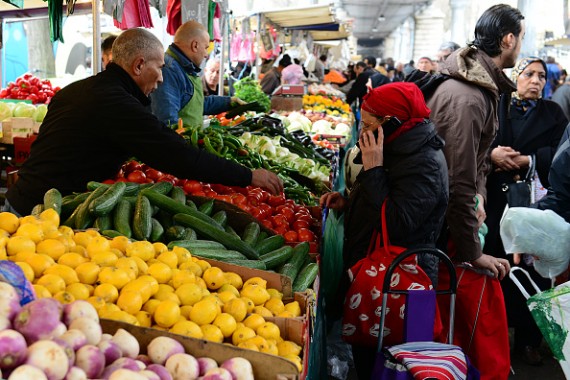 PARIS, FRANCE - NOVEMBER 18: A woman buys vegetables at the Marche Barbes, the outdoor market located in the 18th arrondissement of Paris as normal life resumes in the area on November 18, 2015 in Paris, France. Barbes is a neighbourhood in Paris with a large amount of Muslim residents. Following the terrorist attacks in Paris on Friday which claimed 129 lives and injured many more, the Muslim community of Paris has seen an increase in security checks, adding to tension in the community.
(Photo : Photo by Frederic T Stevens/Getty Images)

The recent cases of foodborne illness outbreaks in major restaurants are indeed a cause of alarm to all consumers. While the U.S. food supply is considered to be one of the safest in the world, annual statistics for foodborne illnesses is still staggering. According to the FDA, there are around 48 million cases of foodborne illness every year, or roughly 1 in 6 Americans will experience a food-related illness each year. Of these 48 million, 128,000 will need hospitalization and around 3,000 cases will result in death.

As a result of the recent outbreaks, the food industry has considerably tightened its food handling protocols to ensure the safety of its products. For example, Chipotle has recently announced added measures in the way it handles its food as a result of last year's multi-state E. Coli outbreak. This industry-wide vigilance results to a safer food supply in the U.S.

In another front, researchers are trying to tackle the foodborne illness problem from another angle. A recent study done by University of Illinois' College of Agricultural, Consumer and Environmental Science (ACES) tried to determine if there are factors involved that make certain vegetables more susceptible to contamination.

In particular, the research team studied the ability of pathogenic viruses in adhering to the surfaces of fresh produces. The team tested two factors: (1) if the morphology of the leaf or fruit - the roughness of its surface - is a factor for a virus ability to cling to the produce even after washing and (2) if the chemistry of the leaf or fruit - the waxy layer in leaves and fruit surface that serves as a natural protection - is likewise a contributory factor enabling a virus to cling to the surface.

Jack Juvik, a geneticist at the University of Illinois, explains that their research focused on 24 of the most common salad vegetables used in the U.S. After inoculating surfaces of the vegetables with a swine virus that mimics human rotavirus, the researchers rinsed them twice with a saline solution before testing for viral residue.

Researchers were surprised to find that vegetables with three-dimensional crystalline wax structures have significantly fewer viruses after rinsing. This was a surprise finding since, according to Juvik, they actually expected more viruses to cling to the rougher surfaces because, theoretically, viruses could "hide" more efficiently in these rougher surfaces.

There are two possible explanations offered by the Juvik which made it harder for viruses to cling to certain vegetables. Viruses normally cling to oxygen groups like OH (hydroxide) which explains why it clings to the proteins and carbohydrates of the plants' surfaces. However, if the natural wax covers the surface of the vegetables, it creates a situation where it would be harder for viruses to adhere to the surfaces.

In addition, rinsing the vegetables with water gives the viruses the OH they need to adhere, making it easier to remove them from the surfaces.

Juvik explains that this is the first study linking the surface characteristics of vegetables to the degree of risk of possible contamination. While still in the preliminary stage, the study could eventually help reduce foodborne contamination by recommending with producers offers the least likelihood of viral adherence or by developing better rinsing procedures using data obtained from future trials.