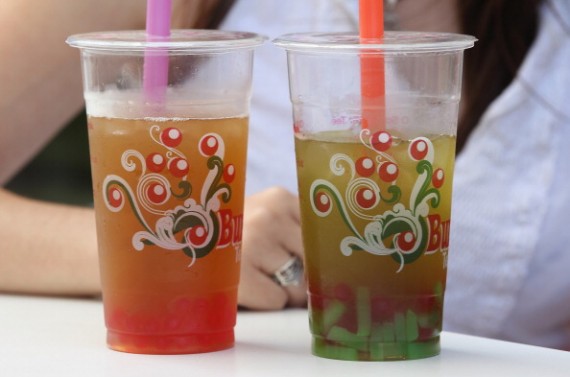 BERLIN, GERMANY - AUGUST 22: A young woman sips bubble tea outside a bubble tea cafe on August 22, 2012 in Berlin, Germany. Bubble tea, which fuses Asian tea with milk or fruit syrups and sometimes contains balls of tapioca, originated in Taiwan and has most recently spread in popularity to North America and Europe.
(Photo : Photo by Sean Gallup/Getty Images)

Bubble tea was first invented in Taiwan in the '80s and recently started making a comeback.

According to NPR, bubble tea is a big thing in Asia - everyone loves it: creamy, sweet, often flavoured tea with chewy black tapioca pearls bobbing at the bottom of a tall cup, and a big straw with which to slurp them up. There's a general misconception that these chewy tapioca pearls are the bubbles - but they're not. They're just the pearls! The bubbles in bubble tea come from the fact that the drink, once prepared, is shaken in a cocktail shaker to produce actual bubbles and make the drink frothy.

And bubble tea isn't just back - it's playing ambassador to a whole host of other foods and trends.

The tea-based drink is also known as pearl milk tea or boba milk tea and is a refreshing alternative to your typical milkshake or fizzy cordial during the warmer months. These unusual teas come as a fruit, milk or tea base blended with ice and come with small chewy tapioca balls, also known as 'bubbles' or 'pearls'.

According to Hot 100 FM, the beverage enjoyed a brief moment of popularity in major metropolitan areas in the late aughts, popping up on college campuses or near communities with large Asian populations. (One such place, in New York City's Union Square, even had a lofted DJ booth.) But the trend dried up quickly.

"What we saw before was a segment that didn't grow," says Andrew Chau, co-founder of the popular chain Boba Guys, which has three stores - in San Francisco and New York City. He explains that a majority of these shops opened next door or down the street from existing stores. "They were all stealing customers from each other, and no one made money."

Boba Guys' model puts its ingredients front and center. The chain uses organic milk and sources its own teas. Its jellies (lightly gummy substitutes for the tapioca pearls) are made in house. And there are plans to begin testing house-made tapioca pearls in the near future as well.  Bubble Tea chains like Boba Guys aren't married to the original recipe. And some experiments, like horchata boba tea, have no tea in them at all.

Some boba purveyors are even trying to lure cocktail lovers. Called Boba 7, the backroom serves boba cocktails made with beer or the Korean alcohol soju, in addition to an inventive nonalcoholic menu.

"They would take exciting boba drinks, pour some shots in there, and think that's what makes it a cocktail," Keung says. "That just makes it worse."

Bringing in different trends, cultures and age-groups is what Boba 2.0 is all about. "If we're going to bridge cultures, we want to bring the best of the West and the best of the East," says Chau.