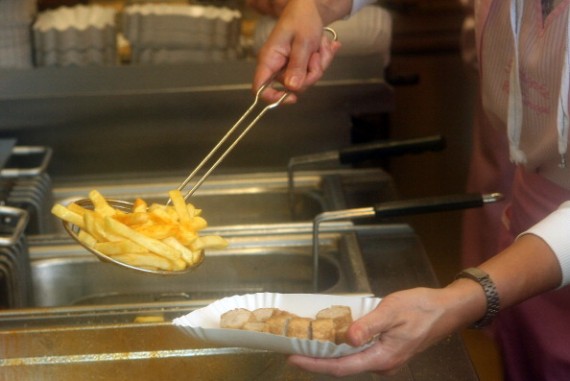 An employee prepares a plate of currywurst with French fries at Konnopke's currywurst stand on July 14, 2012 in Berlin, Germany.
(Photo : Adam Berry/Getty Images )

While most people are advised to keep off fried foods, there are others who want their food to be crispy whether it is Chongqing Sichuan spicy chicken or chicken with chilies or the plain French fries. Scott Andrew Paulson, a physicist at the James Madison University, has been trying to create the perfect French fry and offers a guideline how to double fry your food.

Immediately when any food is put into heated oil, it gives out a glorious sizzle from the boiling water away from the potato slices. There is a burst of bubbles cradling the fries and plenty of people say the oil is boiling," NPR quotes Paulson as saying. He further says that what actually happens is that people are boiling the water very close to the surface of the food. Basically, frying is a dehydration process, denoting that the drier the food is when one starts frying, the better the crust will be.

Nevertheless, there seems to be one problem. The water just beneath the crust of the food is unable to escape easily. As the water vaporizes and expands, it generates a type of bubble that is ensnared under the oil. Except for helping to inflate certain batters, such as the pancake batter on fried Oreos, it prevents the crust from turning very chunky. It is advisable that the food is kept in the oil a little longer, but that again there is the risk of overcooking.

The secret to overcoming this problem is frying the food twice. Paulson says that he fries his potatoes at 350 degrees for a few minutes. Subsequently, he freezes them and fries the potatoes again.

In fact, double fry also works fine for other foods, as moisture in the middle of the food drifts to the surface when the food cools; making the surface gets soggy again. Double frying helps to get rid of this moisture.

There are a few reasons why this possibly is effective. The first reason is that the food already contains lesser water compared to what it had before the first fry. Secondly, the first fry alters the microscopic structure of the food. When the food is fried, oil rushes into the food via the air pockets present, forming warped and twisted channels.

As the cooking progresses, these pathways become and merge with each other, explains Pawan Takhar, a food engineer at the University of Illinois. Thaker has studied the dynamics of frying potatoes. During the second fry, the untwisted, simple pathways help water to escape the food easily, making the fries drier as well as crisper.

Taker offers another science tip of double frying. When the food begins to cool, the vaporized water inside the food pops and transforms into the water again, Takhar says, adding, this creates a suction force that pulling away surface oil deep into the food, making the food greasier. Hence, it is advisable that you clean up any excess oil on the food soon after frying.