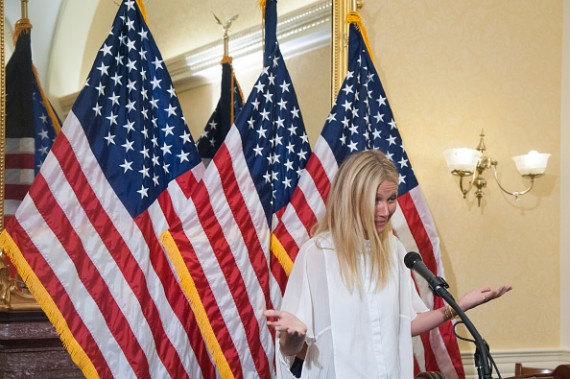 Actress Gwyneth Paltrow speaks during a news conference to discuss opposition to H.R. 1599 on August 5, 2015 in Washington, DC. H.R.1599, known as the 'Deny Americans the Right to Know (DARK),' which would 'take away the right of states to label Genetically Modified Organisms, stop the Food and Drug Administration from ever using its authority to craft a national GMO labeling standard, and add to consumer confusion by allowing 'natural' claims on GMO foods.'
(Photo : Kris Connor/Getty Images)

During the last one week, several big food corporations, counting General Mills, Kellogg, and Mars have already announced their plans to label such products, albeit unwillingly. However, General Mills has stated that it believes one ought to know what their food contains and also how the company makes its food, Eco Watch reported.

It is certainly a victory for the consumers and it has been possible owing to the efforts of a tiny state Vermont, which has pushed the major food companies into a corner. Vermont passed legislation requiring mandatory labeling two years ago. In fact, the Grocery Manufacturers Association has put up a strong fight against the law, both in court and in Congress, but has been unsuccessful thus far, NPR pointed out.

Recently, the Congress has been unsuccessful passing an industry-supported initiative that would have led to a voluntary national standard for labeling, in addition to preempting Vermont's law. As a result, the food corporations still have time until July 1 to meet the terms of Vermont's labeling mandate.

As it is just not possible to create different packaging only for Vermont, it seems that this tiny states have created a labeling standard that will soon be effective throughout the nation.

While there is no denying the fact that consumer pressure strongly impacted on the brands' decisions to label, it is worth noting that all the food companies that have announced plans to label their products have not taken a strong stand on labeling. At the same time, four out of the five companies have announced plans to label their products only after a Senate bill to forestall Vermont's labeling law failed and before an amended bill are introduced in the Senate on April 4 following the resumption of the Congress from Easter break.

At the same time, it is needs to be noted that all the food companies that have announced plans to label obdurately defend the "safety" of GMOs and not even make any mention the fact that the assortment of GMO crops, from which GMO food ingredients are derived, are sprayed with glyphosate, which the World Health Organization (WHO) classified last year as "a probable human carcinogen."

Therefore, it is obvious that there is a long way to go before all food corporations accept the distressing consequences of the GMO monoculture model on the environment, global warming and human health.