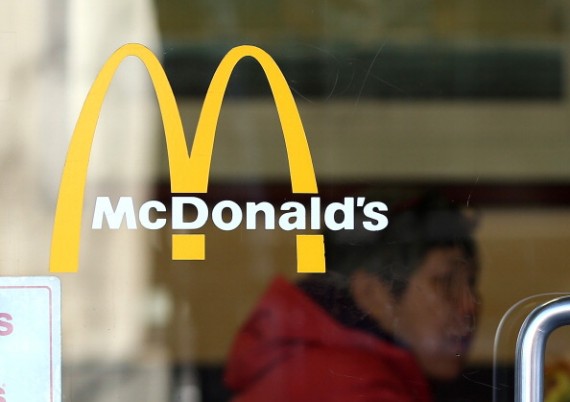 SAN FRANCISCO, CA - MARCH 12: The McDonald's logo is posted in the window of a McDonald's restaurant on March 12, 2013 in San Francisco, California. McDonald's has retained its number one ranking in both global and domestic sales and continues to be the largest single restaurant brand in the world with company-store sales last year of $4.53 billion and franchise-store sales of $31.063 billion for a domestic total of $35.59 billion.
(Photo : (Photo by Justin Sullivan/Getty Images))

Since posting a 30% quarterly drop in profit last October, McDonald's Chief-Executive-Officer, Don Thompson, has announced that changes would be coming to the McEmpire, including fewer menu options and new customization of both sandwiches and value meals. Sometime in the year, the company publicly announced that it would interchange a new slogan "Lovin' Is Greater Than Hating" with its "I'm Lovin' It" catchphrase, a rebuke against the company's digital consortium of detractors, big and small.

According to The Atlantic, yet, after a year with so much effort centered on streamlining its menu and corporate structure, McDonald's has filed to trademark a tagline that could serve to highlight those endeavors: "The Simpler The Better" instead of the traditional, "I'm loving it".

"We routinely file intent-to-use trademark applications as part of our regular course of business. We can't share details at this time as to how this trademark may or may not be used," a McDonald's spokesperson said.

According to Restaurant Business Online, despite speculation that McDonald's has a new chain strategical slogan in the works, "The Simpler The Better" could also be employed on a smaller scale part of the restaurant chain, such as with limited-time menu items, value meals, kid's Mcfreebies or not used at all, BurgerBusiness.com shares, noting that the chain trademarked "McBrunch" in 2014 but did not move forward with using the term.

A few recent signs indicate that McDonald's turnaround strategy has been a boost to the chain, which saw its comp sales increase 5.7% over year during the fourth quarter of 2015.