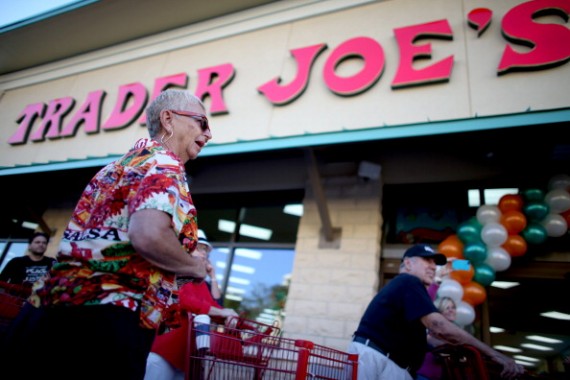 PINECREST, FL - OCTOBER 18: Shoppers lineup as they wait for the grand opening of a Trader Joe's on October 18, 2013 in Pinecrest, Florida. Trader Joe's opened its first store in South Florida where shoppers can now take advantage of the California grocery chains low-cost wines and unique items not found in other stores. About 80 percent of what they sell is under the Trader Joe's private label.
(Photo : Photo by Joe Raedle/Getty Images)

Due to some labeling error, Trader Joe's announced a recall on some flavors of its branded chocolate sticks. Apparently, the products contain milk, but it was not mentioned in the products' list of ingredients.

According to a Daily Meal article by Elizabeth Licata, Trader Joe's sent an email last Friday notifying its customers about the recall. The affected products, in particular, are the Chocolate Orange Sticks and Chocolate Raspberry Sticks. These products are described as fruit-flavoured jelly sticks coated with a thin layer of dark chocolate.

It was found out the list of ingredients on the products' packaging did not include milk which is actually an ingredient for the sticks. Though not particularly worrisome to most people, milk may cause adverse reactions to those few people allergic to it. Two people have already reportedly experienced allergic reactions.

Another reason for the recall is that there are people who do not have milk allergies and are not intolerant of milk but still avoid milk products due to dietary considerations.

However, those who have purchased the products that do not have problems with milk may choose to keep the chocolate sticks as they are perfectly safe to eat. Still, anybody who has purchased them and wants to return the sticks after the announcement could return them and ask for a full refund. Customers who have further questions may contact the company's customer relations at (626) 599-3817 according to a Syracuse article by James Mulder.

Just how dangerous is a milk allergy? According to a MayoClinic article symptoms and severity could vary from person to person but usually involves hives, wheezing, vomiting, diarrhea and loose stool that may contain blood. It may lead to anaphylaxis, a potentially life-threatening situation, where the airways are narrowed which result to breathing difficulty.