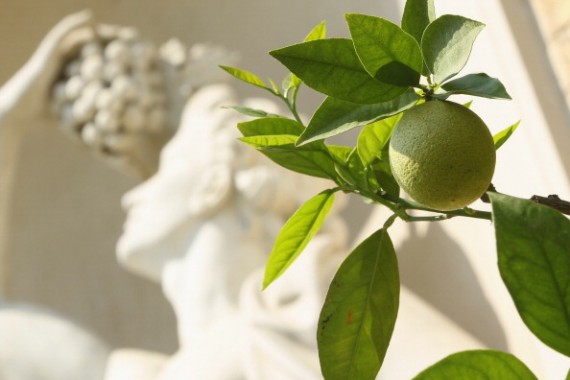 POTSDAM, GERMANY - MAY 22: A lemon hangs from a tree next to a statue outside the Orangerie at Sanssouci Park on May 22, 2011 in Potsdam, Germany. Every year workers wheel out the several hundred exotic plants, including palm trees, cyprus, laurel, lemon trees and eugenia, from their winter storage in the Orangerie to their positions throughout the park. The Orangerie, completed in 1864 under Frederick Wilhelm IV of Prussia, belongs to the Sanssouci Palace grounds and forms part of the network of buildings, including the Neues Palais, that was the official residence of the Prussian royalty. Today Sanssouci and the Orangerie belong to the Foundation of Prussian Palaces and Gardens and are a major tourist attraction
(Photo : Photo by Sean Gallup/Getty Images)

Scientists have found one more reason to include Vitamin C in one's diet. It turns out that aside form preventing colds, Vitamin C-rich diets could actually prevent the progression of cataracts.

The study was led by Dr. Christopher Hammond and published in the journal Ophthalmology according to a NH Voice article by Emma Tiller. The researchers focused on 324 female twins enrolled in the U.K.'s Twins registry for the study. The participants' vitamin C intake was determined by a survey and includes vitamin C sources from both food and supplements.

This is a welcome discovery for people who have the condition, especially among the older population. Cataract is particularly common during old age. The clouding of the lense is caused by oxidation over time and is seen as part of the ageing process.

The study proves that one's diet plays a stronger influence over genetics in the development and progression of the condition. According to the article, the study was able to show that a diet rich in vitamin C was able to cut back cataract's progression by a third.

However, Dr. Hammond points out that only vitamin C from natural sources or food seem to be effective in combating the eye condition. On the other hand, vitamin C from supplements seems to have no effect on the cataract at all.

For now, researchers speculate that vitamin C may halt cataract progression because it is an antioxidant. Since the fluid inside the eye normally contain high levels of vitamin C, it is possible that increasing vitamin C in one's diet could lead to a higher concentration of the vitamin in the fluid. This would provide a stronger protection against oxidation. However, the study did not speculate on the reason why only naturally sourced vitamin C seem to work and not the supplements.

Citrus fruits such as orange, lime, lemon and grapefruit contain vitamin C in abundance. In addition, even non-citrus fruits like papaya, banana, pear and watermelon are also excellent sources for the important vitamin according to WHFoods.