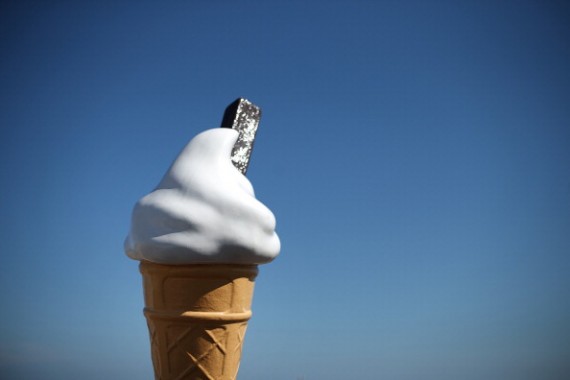 LOWESTOFT, ENGLAND - JULY 17: A giant plastic ice cream cone glints in the sun on the South Beach on July 17, 2014 in Lowestoft, England. The Met Office has issued a heatwave alert as temperatures throughout England and Wales are predicted to reach their highest level of the year this weekend.
(Photo : (Photo by Peter Macdiarmid/Getty Images))

There's a very pretty ice cream that's been getting a lot of attention from Instagram users lately. It is the ice cream from Eggloo. But it is not your typical sundae because this sundae is made up of egg waffle ice cream cones.

Egg waffles famously originated from Hong Kong. This street food has then evolved and has become more popular in other cultures as well. According to Business Insider "Nowadays, food is all about presentation" that's why it's no surprise this pleasant looking ice cream is getting really popular.

But turning the egg waffles into an ice cream cone is just one brilliant idea. Eggloo, a sweets and pastry joint in New York City. They are the one who introduced egg waffle ice cream cone to the public. They topped it off with ice cream and a lot of colorful, tasty and interesting toppings which made their ice cream really good to look at.

Aside from the egg waffle cone, customers can choose from a wide array of toppings! From candy sprinkles to pocky sticks, M&Ms milk chocolates, marshmallows, fruits, cereal, condensed milk, fortune cooking and mochi!

They also added a twist to their egg waffle cone. They have matcha egg waffles and chocolate egg waffles.

This amazing dessert has captured the eye of many on the internet. Some customers expressed their love for the egg waffle ice cream and here is what they think about it: Instagram user @reakdalener said it's "another reason to move to NYC". While @marisahashinstagram said, "These are what I was telling you about!". A Youtube webisode of What's Up City Kid also picked up on the Egg Waffle Ice Cream craze. The hosts tried and featured the ice cream as well and expressed their love for the said ice cream on Instagram as well. @tristinandtyler said, "We had so much fun!!!".

Eggloo now has almost 9,000 Instagram followers. Thanks to this very pretty egg waffle dessert that everyone is talking about.