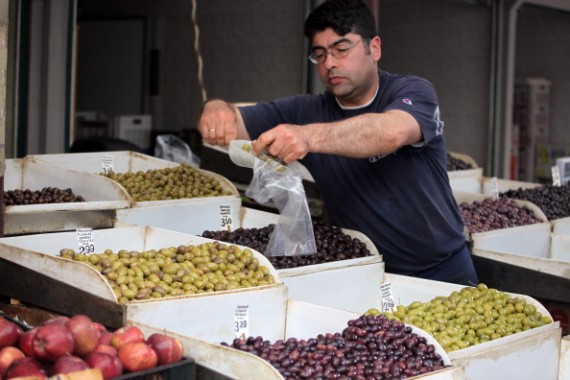 ATHENS, GREECE - MAY 30: A market trader sells olives at the fruit and vegetable market in the city centre on May 30, 2011 in Athens, Greece. The Greek government is trying to implement a further round of severe austerity measures after EU finance officials have argued that the country, which is already struggling to meet the terms of an international euro110 billion bailout, could require even more help.
(Photo : Photo by Matt Cardy/Getty Images)

In what is said to be the biggest global crackdown on illicit food and drink, Europol announced that the agency seized more than 10,000 tons of these potentially unsafe goods according to an article by BBC.

Items confiscated include monkey meat, dead insects and sugar contaminated with fertilizer, according to an ABC article. The highly successful raids are part of Operation Opson V and involved the cooperation of the law enforcement agencies of 57 countries, the Interpol and Europol.

Among the most notable seizures during the three-month crackdown (November 2015 to February 2016) are as follows:

2.       A substantial 10,000 liters of fake or adulterated alcohol was discovered in Britain, said to have been enough volume to fill 12,000 bathtubs.

3.       Almost 9 tons of sugar contaminated with fertilizer was seized in Khartoum, Sudan.

4.       Thai police discovered in illegal meat cache from imported from India, destroying more than 30 tons of illicit meat that were unfit for human consumption. They would have been destined for sale in the nation's supermarkets.

5.       Two tons of fake foie gras, the delicacy made from duck or goose liver, was uncovered in Hungary. Apparently, the fake goods contained only duck meat and not the pricier liver.

6.       Indonesian police seized 70kg of chicken intestines swimming in formaldehyde to preserve them.

8.       Australian authorities discovered 450 kg of honey found to be adulterated.

9.       French police destroyed 11kg of locusts and 20 kg of caterpillars they intercepted at airports.

Counterfeit goods market is a multi-billion dollar criminal industry, said to be partly due to the high cost of food according to Europol.

Speaking for Interpol, Michael Ellis said, "Fake and dangerous food and drink threaten the health and safety of people around the world who are often unsuspectingly buying these potentially very dangerous goods."