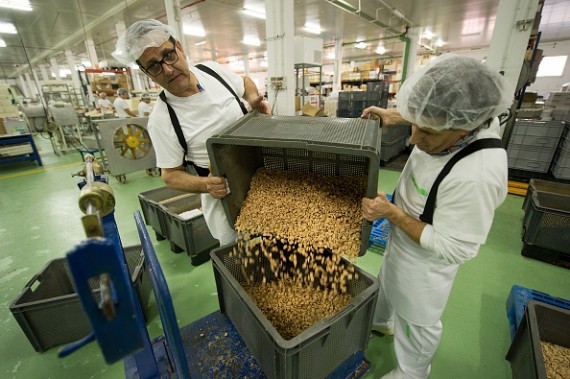 JIJONA, SPAIN - NOVEMBER 24: Workers place newly roasted almonds into crates to cool during the production of turron at the El Abuelo artisan factory on November 24, 2015 in Jijona, Spain. Turron, a nougat confection of toasted almonds mixed with honey, sugar and egg yolk is produced almost exclusively in Jijona and is popular throughout Spain and Latin America as a traditional christmas dessert. Turron has been produced in Jijona since 1850 when the family-run Primitivo Rovira set up.
(Photo : Photo by Denis Doyle/Getty Images)

A new research in a university in the United Kingdom claims that eating foods such as nuts and vegetable oil can slow the progress of Type 2 diabetes.

In a report published in Mirror UK, dietary researchers in King's College London believe replacing saturated fat with the polyunsaturated fat found in such food considerably slows the disease's progress in people with early stage diabetes.

Weight loss is widely considered as the most effective way to curb the progression of diabetes. Researchers have examined whether a targeted dietary intervention could have an additional pre-emptory impact now.

According to Diabetes Forecast, patients with Type 2 diabetes can 'completely reverse disease' with extreme low-calorie diet, as well.

Small groups of people across a wide spectrum of glucose levels including healthy, athletic and obese, as well as those with prediabetes and type 2 diabetes were tested using robust analysis of glucose levels and fatty acids in their blood.

Dr Nicola Guess, a professor from the Division of Diabetes and Nutrional Sciences at King's College London, said: "The findings suggest that increasing dietary intake of polyunsaturated fats may have a beneficial effect for patients with a certain type of prediabetes but also illuminates why certain dietary changes may have no effect on progression of type 2 diabetes in the other subtype."

"We intend to build on this work with larger studies, and ultimately test this idea in a randomised trial," she added.