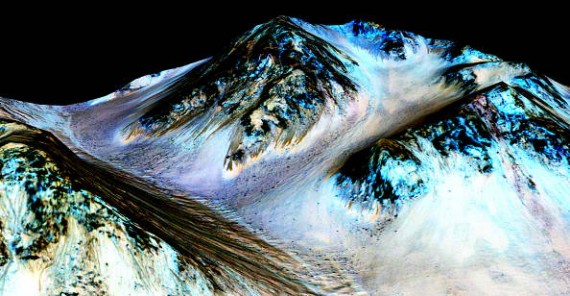 HALE CRATER, MARS - UNSPECIFIED DATE: In this handout provided by NASA's Mars Reconnaissance Orbiter, dark, narrow streaks on the slopes of Hale Crater are inferred to be formed by seasonal flow of water on surface of present-day Mars. These dark features on the slopes are called 'recurring slope lineae' or RSL.
(Photo : Photo by NASA/JPL-Caltech/Univ. of Arizona via Getty Images)

In an interview with Vice News, cosmic mythologist and medical astrologist Laura Magdalene Eisenhower, posited that our diet as humans play an important role in attracting alien life into Earth.

Eisenhower, who is a great-granddaughter of former United States President Dwight D. Eisenhower, believes that while conventionally raised food may contain "toxic energies" that can "link up to an artificial intelligence system," vegetarian and vegan produce a "cleaner and purer energy."

"When you are dealing with eating animals, it is a heavier density to process in our physical bodies," she explains.

Eating vegetables, which have lighter densities, help to connect better with extraterrestrial life though the phenomenon tends to be on a case to case basis.

Eisenhower discovered that apart from the diet, emotional reactions to different stimuli also affect the attraction.

Eisenhower also thinks that the extraterrestrials (ETs) may have infiltrated various aspects of human life including but not limited to the food industry. She cited GMOs as an example of how our food supplies have been "altered" to introduce sickness, infections and diseases into the populations.

When asked whether the ETs consume food the way humans do, she said that most aliens, like plants, absorb energies to sustain their lives while there is a species called extraterrestrial biological entities (EBEs). There is another kind of alien called reptilians who may or may not eat humans.

Eisenhower's theories may not be proven yet but she appears to be carrying on the legacy of her presidential ancestor. Among alien conspiracy theory circles, it has been rumored that President Eisenhower signed a treaty with groups of extraterrestrial beings in 1953 when he was in office.