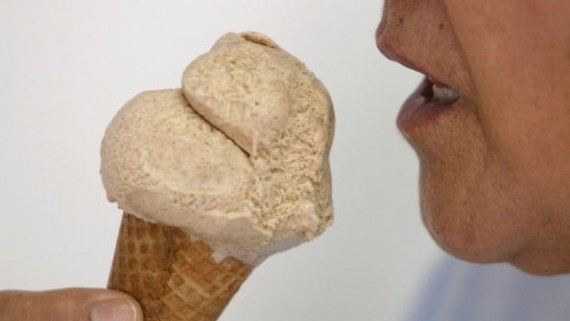 MIAMI - MAY 12: A customer eats an ice cream May 12, 2004 at Wall's Old Fashioned Ice Cream in Miami, Florida. A combination of political unrest and natural disasters overseas, and fluctuations in the dairy industry in this country has left ice cream manufacturers with higher prices for key ingredients, including milk, vanilla and cocoa. Jeffrey Wall's owner of Wall's Old Fashioned Ice Cream said, ' I'm trying to minimize costs to the consumer by raising prices on a few select items.' Consumers can expect to pay more for everything from pints in the grocery store to cones at the stand. Estimates vary from 6 percent to as much as 20 percent or more.
(Photo : Photo by Joe Raedle/Getty Images)

Ice cream lovers should be warned for this pricey summer.

With warm weather just around the corner, many people would have been looking forward to enjoying a cone of cold ice cream during the dog days of summer.

But, if you're thinking that you'd be able to go back to the ice cream store multiple times, think again. Experts think vanilla ice cream prices all over the country will increase during summer due to the huge increase in the cost of ingredients.

According to Delish, the price of vanilla beans, especially, has slowly risen over the past four years- last year increasing by 150 percent, making the spice the second most expensive in the world.

As early as mid-2015, companies have already foreseen a rising trend in the price of vanilla beans due to poor harvest in the island nation of Madagascar, one of the beans' biggest producers, not to mention the storms that ravaged the country in August-September 2015.

According to Consumer News and Business Channel, Madagascan vanilla beans were sold for £59 a kilogram at the start of 2015 compared to £144 a kilogram in January this year.

Its likely ice cream companies will have to raise their prices or use the cheaper alternative vanillin, as a result. It is Madagascan vanilla beans that are most commonly used in British ice cream due to its deep flavour despite Mexico and Tahiti also exporting the beans.

Even if vanilla isn't your ice cream flavor of choice, chocolate and strawberry ice cream lovers should not be smug as vanilla extract is often used in other flavors.

The shortage is also likely to impact companies that use the ingredient in cakes, perfume and fizzy drinks.

Yet there might be some hope: A few experts predict this summer's crop of vanilla will be better than last year's, with some of the crops expected to be shipped as early as November.