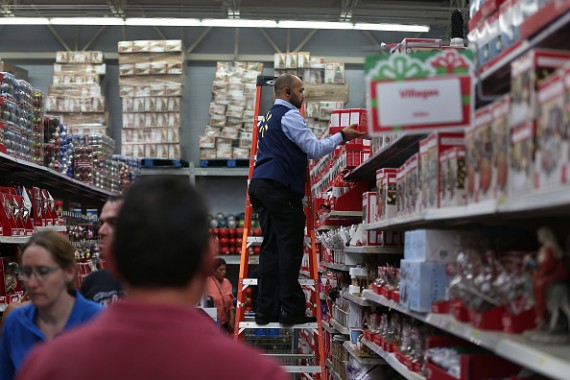 Jonathan Mary helps a customer at a Walmart store as they prepare for Black Friday shoppers on November 24, 2015 in Miami, Florida. Black Friday, which is the day after Thanksgiving, is known as the first day of the Christmas shopping season and most retailers offer special deals on the day
(Photo : Joe Raedle/Getty Images)

Wal-Mart has recently launched the 'Fight Hunger. Spark Change' campaign throughout their stores in Northwest North Carolina, including Elkin and Mount Airy, which is a nationwide initiative calling the public to take action in the fight against hunger.

However, by combining Wal-Mart's donation with the supplier donations through customer donations and product purchases, the campaign aims to secure 75 million meals for the Feeding America Network, of which Second Harvest Food Bank of Northwest NC is a member, according to Elkin Tribune.

"Across the 18 counties served by Second Harvest Food Bank of Northwest NC, one in every six people struggles with food insecurity, and more than one in every four children goes without enough to eat," said Jenny Moore, development manager: public relations and marketing for Second Harvest Food Bank. "With strong support from the community, the campaign will provide significant support for our network of more than 400 partner food assistance programs working in local communities to help neighbors in need, as it helps to raise awareness about the continuing problem of hunger in America."

The campaign, which runs through April 25, aims to 'Fight Hunger' and 'Spark Change' in three ways, which include online acts of support, buying participating products, and donating at the register.

The online acts of support will generate donations for a Feeding America food bank,  including but not restricted to the Second Harvest food bank by using #FightHunger hashtags on social media, and also showing support for the Wal-Mart's campaigns. For each act of online support, Wal-Mart will donate an amount to help secure 10 meals (an equivalent of 9 cents), up to $1.5 million, according to The Dispatch.

For every participating product purchased at Wal-Mart stores, the manufacturer will donate 9 cents to Feeding America, to help secure 10 meals.  Additionally, individuals can also make a donation to the campaign at the register during checkout.