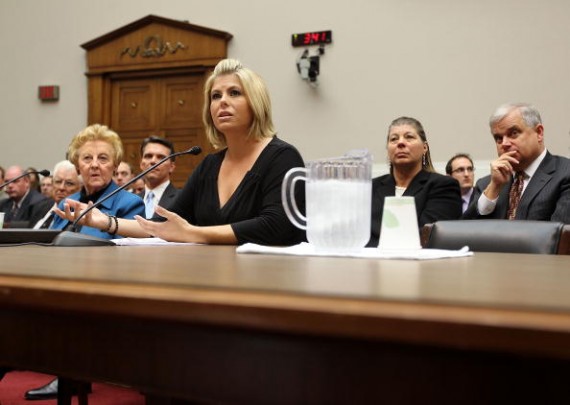 Victims of salmonella outbreak, Carol Lobato (L) and Sarah Lewis (R), testify during a hearing before the Oversight and Investigations Subcommittee of the House Energy and Commerce Committee September 22, 2010 on Capitol Hill in Washington, DC. The hearing was to examine the outbreak of salmonella in August, 2010 that caused sickness for more than 1,500 people and a recall of more than a half-billion eggs.
(Photo : Alex Wong/Getty Images)

Markus Covert, who is an associate professor of bioengineering, will direct the Stanford University center, named The Allen Discovery Center for Multiscale Systems Modeling of Macrophage Infection.

The SU Center draws its name from the benefactor, Paul G. Allen of the Paul G. Allen Frontiers Group and formerly Microsoft, which was cofounded 40 years ago.

"To make the kind of transformational advances we seek and thus shape a better future, we must invest in scientists willing to pursue what some might consider out-of-the-box approaches at the very edges of knowledge," says Mr. Allen, according to reports from PR Newswire. "This, of course, entails a risk of setbacks and failures. But without risk, there is rarely significant reward, and unless we try truly novel approaches, we may never find the answers we seek."

"Allen Discovery Centers are a new type of center for leadership-driven, compass-guided research in partnership with major research organizations and universities," according to the Frontiers Group website.

"Each Center will typically receive $20 million over eight years with $10 million in partner leverage, for a total scope of $30 million each." The non-profit Frontiers Group at Tufts University is funding another Discovery Center, according to reports from Food Safety News.

"Over the next 50 years bioscience will undergo a radical transformation as advancements in life sciences converge with mathematics, physical sciences, and engineering," said Tom Skalak, the founding executive director of the Paul G. Allen Frontiers Group. "The time is now to make this type of transformative investment in bioscience to advance the field and ultimately to make the world better."

Notably, the species of salmonella cause more than 90 million infections annually, including 20 million cases of typhoid, according to a Stanford news release.

A Doctor Reveals What to Eat to Avoid Hangover

It's purple, sweet, and did we say yummy? We purple you!

Breastfeeding During COVID-19 Pandemic: What You Need to Know?

Breastfeeding has been the recommended method of feeding a newborn baby. But what about during this COVID-19 pandemic?