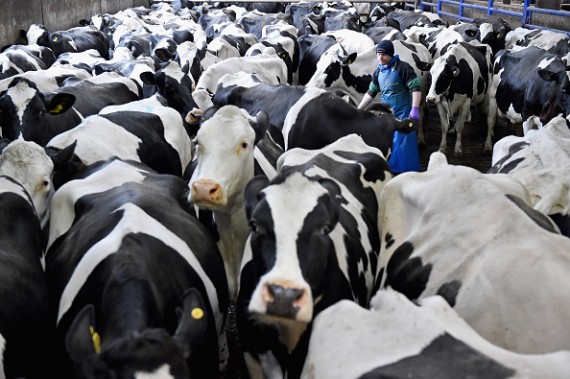 BALFRON, SCOTLAND - MARCH 16: Stewart Johnstone tends to Holstein cows as they are milked at Clayland farm on March 16, 2016 in Balfron, Scotland. Many farmers across the country are voicing concerns that Brexit could be a dangerous step into the unknown for the farming industry.
(Photo : Photo by Jeff J Mitchell/Getty Images)

Farmers bent on increasing milk yields from their cow and buffalo herd need to give them an upgrade. A tech upgrade, that is.

Pakistan-based e4technologies makes this high tech cow collars. According to the Cowlar website, the device has four features. Firstly, the Cowlar provides temperature alerts to avoid milk loss caused by harsh weather scenarios. Since the farmer is warned of such unproductive temperature developments, he can then take precautions to mitigate its effects.

In addition, the Cowlar could be used as early disease detection system. The website explains that the high-tech collars have the capability to detect signs and symptoms of disease at an early stage, making it possible to provide timely medical intervention or even preempt the disease before it goes full-blown.

The device is also capable of detecting cows in heat. And this is a good thing in the business because if the farmer misses the heat cycle, the next cycle comes in 21 days. That would be missing 21 days of milk production which is valued at US$400 according to Umer Adnan in the Tech In Asia article.

Lastly, Cowlar provides real time monitoring and alerts. For example, the system notifies the farmer if a cow wanders beyond a preset perimeter.

Dairy is an important industry in Pakistan where 63 million animals 42 billion liters of milk annually. It also employs a large portion of the population with an estimated 8 million households involved in milk production making Pakistan the fourth largest milk producer in the world.

Yet, due to the commonly used antiquated production techniques, cows yield only four to five liters per day, a far cry from the United States daily average of 32 liters. This low yielding scenario is what Umer plans to address with the Cowlar. Putting a figure on what his device can accomplish, Umer estimates that if overall milk yield is increased by a mere 5 percent, it will add US$1 billion to Pakistan's economy annually.