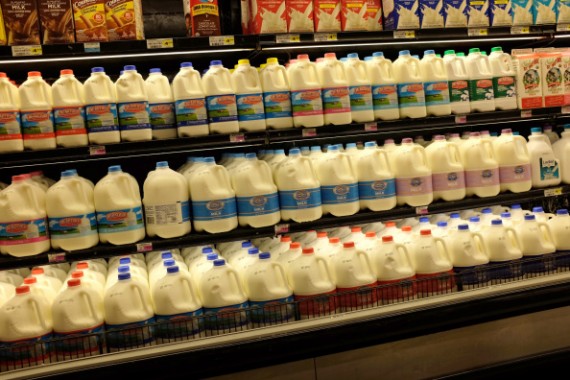 Reports indicate that milk futures have risen to a record as exports by the U.S. climbed amid shrinking inventories of cheese and butter, signaling higher costs for pizza and pastries
(Photo : Photo by Joe Raedle/Getty Images)

There used to be a time in the not so distant past that doctors forbid anything full-fat, whether milk or other dairy products, in favor of skim and low-fat option. However, science finally sided with full-fat dairy and whole milk saying these may actually reduce diabetes risk and help in maintaining weight.

The research team, lead by Dr. Dariush Mozaffarian, scoured through 15 years of data obtained from 3,333 adults during the Nurses' Health Study and Health Professionals Follow-Up Study before coming up with the surprising find. According to the researchers, their study shows that a significantly lowered risk of developing diabetes, by up to 46 percent, was noted in those who had the highest levels of dairy fats in their blood compared to those who had low.

An even larger study points to the superiority of full-fat dairy. A study which involved 18,000 middle-aged women who were all free from cancer, diabetes, cardiovascular disease and of normal weight at the study's start, cites CBS. At the end of the study, researchers note an 8 percent lower chance of becoming obese in those who ate high-fat dairy.

Susanne Rautiainen, study author and research fellow at Brigham and Women's Hospital and Harvard Medical School, comments that "We saw less weight gain for higher total dairy and high-fat dairy intake and also a lower risk of becoming overweight and obese in those who consumed more high-fat dairy."

It might be too early to change dietary guideline for now but a re-evaluation is proper. Currently, US Dietary Guidelines limits saturated fat intake to less than 10 percent of total calorie intake.

Top 10 Most Popular American Foods of All Time

Mind Your Meal: How Your Eating Habits Affect Your Mental Health