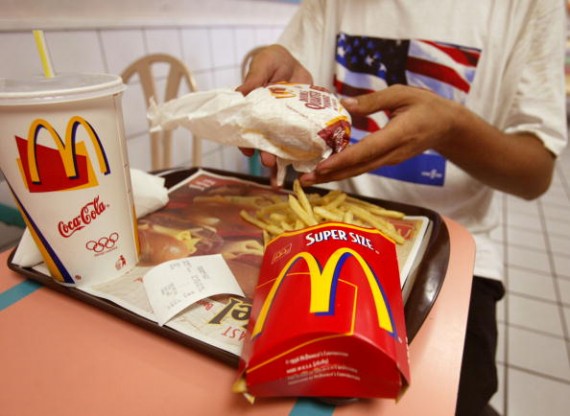 MIAMI BEACH, FL - JULY 18: Jeff Baughman unwraps his Double Quarterpounder with cheese and a Super Fries and a Super Coke on July 18, 2002 at a McDonalds in Miami Beach, Florida. The health effects of an American diet of super-sized fast foods are becoming apparent as increasing numbers of children and adults are being treated for obesity. Studies seem to point to the fact that many overweight children and adults get a large portion of their calories by consuming too many sodas and sweetened juices and beverages. Sweetened drinks + 'super-sized' meals + the convenience of fast food + a decrease in physical activity = a recipe for obesity.
(Photo : Photo by Joe Raedle/Getty Images)

It's finally backed by science. According to a recent study, our poor food choices are due to how our brains are wired.

Some vertebrates, when given the option between eating food with high calories but with an unpleasant taste and eating a more delicious food that does not have calories, would actually choose the calorie-dense option. This, according to scientists, shows that some animals are wired for survival which made them choose the energy-giving though unpalatable food, Science Daily reported.

This is the conclusion of the study done by Yale University researchers who collaborated with researchers from the University of Sao Paulo's Biomedical Science Institute (ICB-USP) and the Federal University of the ABC's Center for Mathematics, Computation & Cognition (CMCC-UFABC) also based in Brazil.

Experimenting with mice, the scientists found that both the pleasure path (triggered by eating sweets and other palatable foods) and the calorie path (which is triggered by the nutritional and caloric content of the food eaten) are found in the neural circuits in the striatum, a subcortical part of the forebrain.

However, there is a distinction between the two neural pathways according to Tatiana Lima Ferreira, a CMCC-UFABC researcher responsible for the study. The neural circuit activated with the sensation of pleasure or reward is located in the ventral striatum while dorsal striatum circuits are activated by the nutritional or caloric value of the food.

The researchers were able to determine which circuit is activated by determining where dopamine is released. Dopamine is a neurotransmitter released by dopaminergic neurons during pleasurable activity like food, sex and drugs according to a News Medical article. This was the first study to map the distinction of neural pathways involved in food palatability and food calorie content.

Researchers designed experiments using sweet substances that contain and do not contain calories. Using solutions containing sugar and solutions with the non-caloric sweetener sucralose, scientists observed that the ventral striatum released dopamine in mice given with either solution, indicating that this reward or pleasure path is purely based on taste or palatability alone.

To detect for the neural circuit responsible for caloric content, researcher altered the sweetener's taste by adding the bitter denatonium benzoate while the mice also received intragastric sugar infusion. Researchers noted a reduced dopamine release in the ventral striatum this time but the dorsal striatum dopamine increased.

This is perhaps the reason why today's fast food is such a hit among today's population. They combine both the high palatability our pleasure and reward circuit in the ventral striatum is craving for as well as answers to the pure caloric seeking of the dorsal striatum.

So the next time you find yourself unmindfully munching into that upsized fries and soda, don't feel too guilty. It's all in the brain.