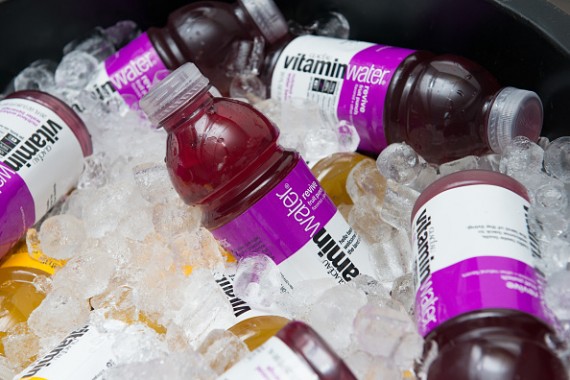 As part of a settlement, Vitaminwater no longer allowed to make any health claims on its labels.
(Photo : Noam Galai/Getty Images for vitaminwater)

After years of questioning whether Coca Cola's Vitaminwater is healthy or not, consumers can now say with certainty that Vitaminwater is not a health drink. In fact, the court forbids Coca Cola to make any health claim about the drink.

The prohibition to make any health claim is part of an approved settlement agreement and ends the years-long legal dispute which centered on these misleading health claims, reports WTOP. In 2009, Centers for Science in the Public Interest (CSPI), along with New York and California customers, filed a lawsuit against Coca Cola which alleged that the company employed "deceptive labeling and marketing for the soft drink, which included claims that the drink could reduce risk of eye disease, promote healthy joints and support optimal immune functions," as reported by Bloomberg.

CSPI communications director Jeff Cronin welcomed the news saying, "This Vitaminwater settlement is good news for consumers." Another settlement clause requires Coca Cola to now add the words "added sugars" in two places on the drink's label. This would highlight the possible health risk posed by the drink due to the eight teaspoons or 33 grams of sugar contained in a 20 ounce bottle of Vitaminwater, Cronin told WTOP.

Aside from the added sugars in Vitaminwater, nutrition expert are not sold on the idea that the added vitamins and minerals make the drink healthy. Some argue that the average person's diet already contain enough of these nutrients that getting them from Vitaminwater is simply a waste. The body does not store any excess of these vitamins and they will just be flushed out from the body through urination. In fact, it is entirely possible that excessive amounts of these nutrients might do the body more harm than good, says Authority Nutrition.

It is not only Coca Cola's Vitaminwater that was targeted by lawsuits due to deceptive labeling. CSPI previously filed a federal class-action lawsuit against Dr Pepper Snapple Group which was already settled out of court. The lawsuit alleged the company's misleading labels in 7Up Antioxidant sodas containing pictures of fruit fooling costumers to assuming that the antioxidant came from fruit or fruit juice.