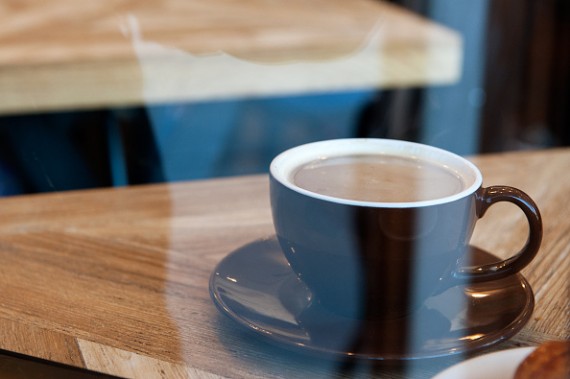 BROOKLYN, NY - FEBRUARY 22: A cup of coffee sits on a table at Colson Patisserie on February 22, 2016 in the Brooklyn borough of New York City. A recently released study found that drinking two cups of coffee a day decreases one's chance of developing liver cirrhosis by 44 percent.
(Photo : Photo by Bryan Thomas/Getty Images)

Good news for all coffee lovers. Apparently, drinking more coffee may offer some form of protection against non-alcoholic fatty liver disease (NAFLD). Moreover, adding coffee to the diet of NAFLD sufferers could help in reversing the medical condition.

An Italian study on mice led by Vincenzo Lembo of the University of Napoli concluded that daily dose of coffee equivalent to six espresso cups for a 70 kg person show improved NAFLD markers in mice which were given a diet high in fat according to Science Daily. In addition, mice that were given their daily caffeine intake experienced lesser weight gain compared to their caffeine-free counterparts.

Study author Vicenzo Lembo explains that while past studies have shown coffee's ability to reverse NAFLD, thi is the first study that shows the stimulant's ability to affect intestinal permeability. The researchers successfully demonstrated that coffee raises the levels of Zonulin, a protein that lessens permeability of the intestines. Apparently, a highly permeable gut worsens NAFLD and liver injury. Left untreated, liver scarring could lead to a life-threatening condition called cirrhosis.

This is indeed a welcome news to all coffee lovers. Coffee is one of the most widely consumed beverage in the world, not only for its flavor and aroma but also for the mild mood-boosting and stimulating effects of the drink.

The highly popular drink is also known for a host of health benefits including decreased in risk for developing type 2 diabetes, Parkinson's disease, stroke, heart disease and symptomatic gallstone disease according to Medscape. In addition, drinking coffee is known to decrease overall mortality.