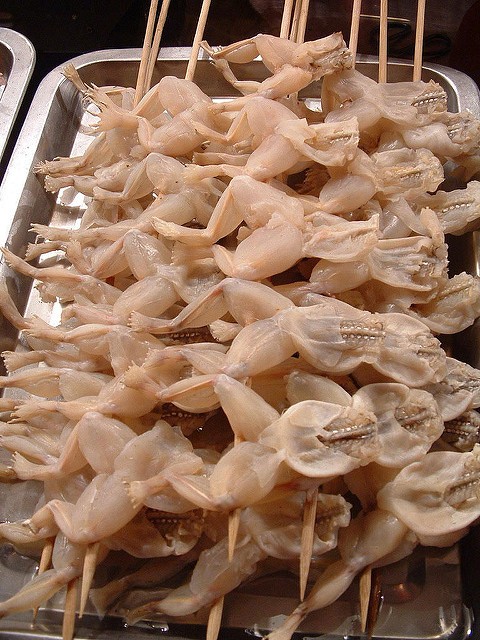 Frog legs are considered delicacy in many parts of the world including India.
(Photo : Photo by Ben Hancock/Flickr CC)

India is a land of diversity and, with its Eastern traditions, certain practices considered common in the populous Asian country might seem bizarre to Western standards. Fortunately or unfortunately as the case may be, this apparent strangeness extends to the culinary scene as well.

While the undoubtedly Indian curry has been accepted in the West, there are peculiar Indian dishes that may not even be common among its populace. Check out these six Indian offerings, compiled by Yahoo Style, which might be considered god sent to more adventurous palates but would definitely be a challenge to regular western taste.

One might have heard of chutney, the regular variety that is, the famous Indian side dish that varies with the season. It may consist of tomato relish, yoghurt, ground peanut garnish or cucumber and mint dip according to Wikipedia. It is a perfectly reasonable way to make use of that glut of seasonal food. But red ants chutney? Now, that would definitely be a challenge or an exquisite delicacy depending on one's predisposition to red ants.

To its credit, red ant chutney, known as chaprah in Batsar, Chhattisgarh is said to have medicinal properties. It is made by drying the ants and their eggs, then flavoring it with condiments, sweeteners and salt.

Famed as a French and Chinese delicacy, frog legs are also consumed in different parts of the world including India. Sikkim-based Lepcha communities believe on its medicinal effects, especially as a cure for stomach ailments. And they're quite delicious too.

If one is not particularly concerned with cholesterol levels, why not try pig brain? It is a delicacy among many counties in the world including India. If one manages to get over that initial gross factor, pig brains can be downright delicious. In fact, chef Richard Knight of Houston's Feast restaurant swears pig brains are the nectars of the gods, reports FoxNews.

Just how good are pig brains? Chef Knight likens them to soft scrambled eggs that why he isn't shy in using them as ingredient in his Pork Brain Terrine. While the Indian version called Doh Khleh - a dish using steamed brain as one of its ingredients- is cooked differently, it should offer the same creaminess and rich taste.

Eating silkworm pupa or chrysalis is quite common in a lot of parts in the world. In Korea, they are so common that they place them in cans and sell them at supermarkets just like a regular canned food. Some even eat them as snacks and they are surely healthier than the junk food snacks the West is so particularly fond of.

In India, they have a silkworm pupa-based dish known as Eri polu. Garnished with bamboo shoot, it's certainly colorful enough improving the dish's aesthetic appeal. What's more, the pupa melts in your mouth (not in your hands) releasing a wonderful aroma in the process. Yummy.

In Nagaland, India's Northeastern state bordering Myanmar, dog meat is so sought after that it is priced higher than any other meat. The region's love of dog meat shows in the variety of dishes they have developed for the meat, ranging from fried to smoked or dried and, of course, dog curry.

While the common way to eat potatoes is to wait until they are ripe enough, Indians prefer them rotten. The dish is made by leaving the crops to rot after their harvest. After assuring that the potatoes are rotten enough, they are then cooked and mixed with other spices. And Phan Pyut lovers certify they are delicious.

So the next time one visits the subcontinent, one can spice up an otherwise almost-boring vacation with these awesome delicacies. After all, the best way to get acquainted with a culture is through its food.