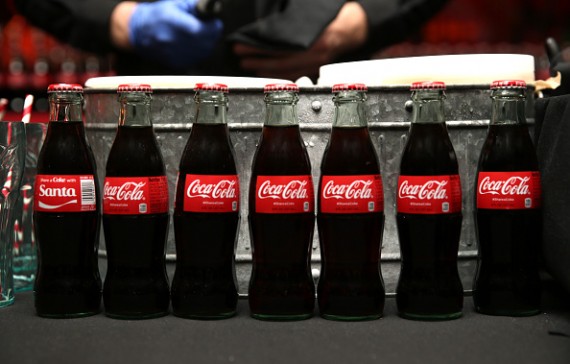 Coca-Cola bottles are seen on display at the 2015 American Music Awards Pre Party with Coca-Cola at the Conga Room on November 20, 2015 in Los Angeles, California
(Photo : Todd Williamson/Getty Images)

In a marketing initiative to implement the "One Brand" strategy to packaging, Coca - Cola has announced the introduction of a unique visual identity, where all brands of Coca - Cola will feature Coca - Cola Red.

The Red Disc, which was introduced in last January, is the signature of the new "Taste the Feeling" global campaign and will now be appearing prominently in all packages. Additionally, to stress the company's initiative of providing choice to the consumers, the new design will help the consumers to choose the Coca - Cola, which will best suit them.

"Packaging is our most visible and valuable asset," Marcos de Quinto said, chief marketing officer, The Coca-Cola Company, according to The Daily Meal. "The Coca-Cola Red Disc has become a signature element of the brand, synonymous with great taste, uplift and refreshment."

Quinto also mentioned that by applying the strategy in the packaging, the soft drink giant is taking the first step towards the full adoption of unifying a brand strategy, where the aim is to unite Coca-Cola family under a single visual identity. This will make it easier for the consumers to choose the Coca-Cola product according to their diet and lifestyle.

The brand unification of Coca-Cola through visual identity is the first initiative in Coca-Cola's 130 years of marketing history, according to James Sommerville, Vice President Global Design, The Coca-Cola Company, where he mentioned the same in a press release.

Sommerville went on to mention that the new design applied to packaging and retail will become a "global design language" and a "historical brand icon" to represent the range of Coca-Cola products.