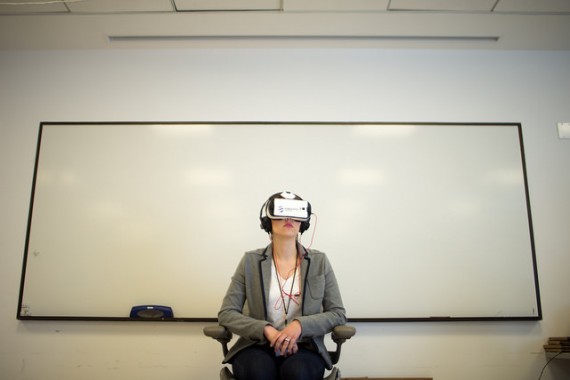 Virtual Dining might be the ultimate indulgence with its promise of calorie free gastronomic experience.
(Photo : Photy by Knight Center for Journalism in the Americas/Flickr CC)

Does gorging on plates after plates of sumptuous five-star cuisine without the unwanted health risk and additional poundage entice you? If so, virtual dining could just be the thing you are looking for.

Everybody loves good food, who doesn't? Probably the only thing that's stopping us from stuffing ourselves to the brim is that fear of becoming fat and of course, that warning from our doctors not to overdo this core passion. But if those two hindrances were somehow eliminated, who wouldn't want to indulge in good food?

New developments in technology might be pushing in that direction. Fortunately, a company named Project Nourished is experimenting with this Virtual Reality (VR) stuff and applying it to the fine art of dining. Project Nourished aims to recreate the ultimate fine dining experience in the virtual realm - a gastronomic virtual reality where, according to its website, one can experience fine dining without the calories.

So how does Project Nourished aim to create this perfect world where everyone eats whatever one craves without getting fat? The company leans on cutting edge technology, of course, having dissected the entire sequence known as dining into its individual components. For the company, the pleasure of dining is just the cumulative sensory inputs which include vision, taste, smell, texture, consistency and sound.

For example, the company uses the VR headset Oculus Rift to trick the eyes into seeing the sumptuous steak one is longing for but forbidden to eat, according to HuffPost. For the smell part, the company uses an aromatic dispenser to let the VR diner experience the smell of whatever virtual food is on his virtual plate.

To mimic the chewing sounds a diner is expecting when eating that delicious piece of steak, a bone conduction transducer is used, reports Forbes. In addition, the motion of moving food from the VR plate to mouth is achieved via the use of a gyroscopic utensil.

The "food" one would be eating is a fusion of gum Arabic, agar and konjac jelly flavored just like the real thing. But does anyone really want to eat virtual food when real food is within easy reach?

Apparently, some people think there really is a market for such hi-tech stuff. In fact, if technology trends are to used as a gauge, virtual reality is set to become a major thing in the near future. Heard about that recent Japanese invention that simulates the er.... intimate experience between lovers? Yes, technology just might conquer as all.