Taco Bell Menu Hacks You Should Not Miss Out On 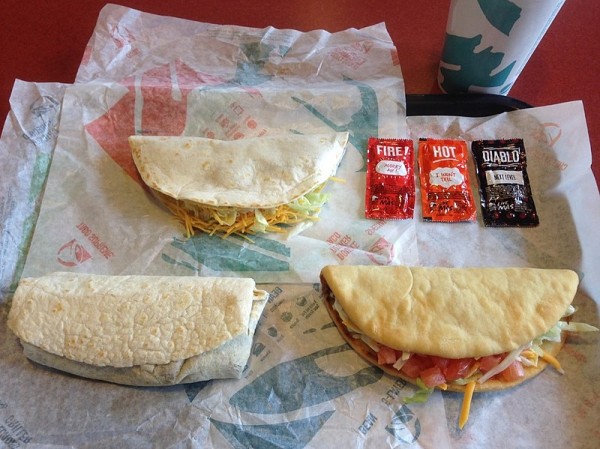 Taco Bell, the beloved go-to fast-food chain in case you're craving for Mexican food. And although you probably already have a favorite that you always order every time you're at Taco Bell, you may want to spice things up by trying these few hacks. Check them out!

Replace your chicken with beef in your Taco Bell quesadilla melt

You can up your quesadilla melt game by asking beef instead of chicken. While there were cheesy quesadilla foodies who were really devastated when Taco Bell removed the mini beef quesadilla from their famous dollar menu, they still can get it back by this neat trick! For an additional 60 cents, your favorite quesadilla is filled with your favorite meat. However, some branches charge extra 20 cents as their prices vary depending on the location.

Taco Bell has been known to be among the few fast-food chains to be vegetarian-friendly as it offers food options that have no meat in it. So instead with cheese and creamy sauces smothering your tortilla chips, you have fresh pico de gallo. Even if your diet is not entirely vegetarian, you can give nachos a la fresco style a shot, and see for yourself if beans, red sauce, and salsa are to your liking.

Load up your Taco Bell nachos and burritos with extra sauces

For a much more tangy and savory Mexican meal, you can always ask for extra salsa sauce of your choice. This is an easy and rather practical hack as you don't need to shell out extra bucks to add that extra kick of sweet and spicy and everything in between. So if that triple layer of cheese, red sauce, and beans are not enough for your nachos, the sauce just might be your heaven-sent answer.

Switch your nacho chips with Doritos

Go crazy with Taco Bell by going to the next level with your nacho chips. You can ask to have Doritos instead of their regular tortilla nacho chips. However, you have to buy the Doritos separately before you can have it switched in place of the store's nachos. The employees will still give you the original tortilla chips, which you can eat afterward.

Some people who actually gave the Doritos nachos a shot didn't find it as appealing as it sounds since it was too salty.

Get the Taco Bell nacho supreme while on a budget

Topped with spiced ground beef, nacho cheese, tomatoes, sour cream, and beans, the nacho supreme usually costs around $3.00. But if you're running low on the dough, don't worry because you can still get your favorite nacho fix by customizing your own. Instead of the nacho supreme, opt for the $1.00 triple-layer nachos instead, and add extra ground beef for only 60 cents.

Taco Bell has been very diverse in its menu, primarily since it also caters to meat lovers and vegetarians alike. And the Spicy Potato Soft Taco is one of the very few everyday things they both love. But if you're an avid meat lover, revamp your potato soft tacos by adding meat on it.