It's National Lollipop Day! Explore a Brief History and Have a Look Into Lolli-Pop Culture 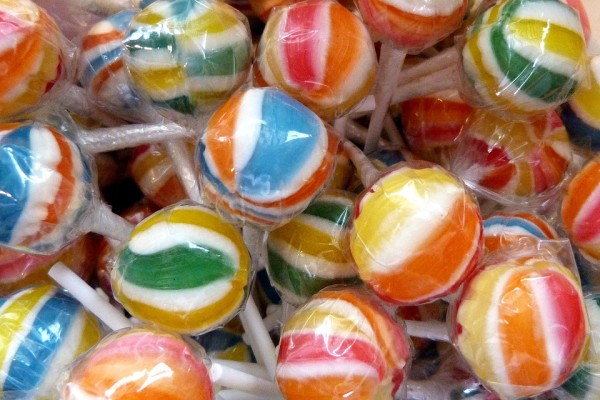 Picture this: you visit your grandparents' home one day. It was late in the morning, and their old transistor is playing some old doo-wop songs. Despite how old the song sounds, you quickly got the catchy tune in your head, and later you found yourself singing along to the Chordettes as they sing that playful "ooh, Lolli, Lolli, Lolli, Lollipop!"

Sweeter than candy on a stick, it's National Lollipop Day!

Today, July 20, America is celebrating National Lollipop Day! Get ready to take a trip on nostalgia train as we reminisce about the history of how lollipop became a treat we grew to love.

Often associated with the retro-themed carnival ride, lollipops have been that sweet-flavored treat on a stick to be sucked in delight. Made from sucrose, corn syrup, and water, lollipops can also come in many shapes and sizes. Although, of course, the most popular ones are the round ones that come in the most vibrant colors. Kids and adults alike (we're betting even your grandparents have fond memories with the treat) would enjoy lollipop day.

And as a love for lollipops, here are a few things you need to know about that favorite candy on a stick.

The History of Lollipops

Sweet. Fruity. On a stick. The idea of candies on a stick had long existed. In fact, during ancient times, people ate hardened candy on a stick. This is considered as the precursor of the modern lollipop.

Around the 1600s, England had its own take in the treat. By boiling sugar candies before putting on a stick, it made their version of the lollipop much easier to eat compared to those from ancient times.

But the modern take on the classic treat was not invented until 1908 when confectioner George Smith from New Haven, Connecticut, started making hard candies. And to make it even more fun, these hard candies were put on a stick.

In the same year, lollipop had grown a lot of Lolli-popularity. Racine Confectionery Machine Company invented the machine that produces 2,400 lollipops per minute.

It seemed that George Smith was not only a sweet tooth, but he was also a fan of derby and horse racing. At the time, there was a racehorse named Lolly Pop, which was said to have been the inspiration of the name of the candy invented by George Smith.

Thus in 1931, he had the term "lollipop" trademarked. However, the word "lollipop" was not invented by George Smith as it was first recorded by English lexicographer Francis Grose in 1796.

The fame of lollipops is thanks to movies and funky advertisements during the 20th century. Aside from the song sung by the sweet quartet, Chordettes, there is also the famous child actress Shirley Temple who sang "On the Good Ship Lollipop" in the 1934 film Bright Eyes.

Dorothy Gale, played by Judy Garland in the eye-candy film Wizard of Oz, was also greeted by the munchkins called the "Lollipop Guild."

So get those Tootsie Pops, Chupa Chups, and Dum Dums, and share them with everyone!

ALSO READ: Popular Snacks From All Across The Globe

3 Things You Can and Can’t Feed Your Dog

It's National Lollipop Day! Explore a Brief History and Have a Look Into Lolli-P ...