President Xi Jinping of China has started an "Operation Empty Plate" drive in mid-August to curb what he called "shocking and distressing" waste.

This prompted a nationwide push to comply with the campaign reminiscent of the Mao era. Many are now wondering if China is facing a food crisis.

The national campaign to lessen the mounting food waste in China is feeding speculation that the supply outlook is worse than the government revealed, and fuelling warnings food could become another front in the worsening US-China rivalry.

The aggressive campaign has made many social media people question if the country has enough sources or does the campaign indicates more profound problems.

According to Yahoo News, China is among the world's biggest producers and consumers of food, with almost 1.4 billion mouths to feed daily. However, this year's recent massive flooding in the Yangtze River basin upset the food supply chain. 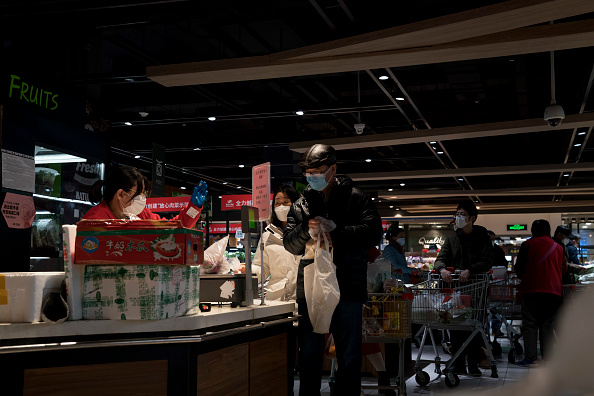 (Photo : Lintao Zhang)
Daily Life In Beijing Amid Coronavirus Outbreak BEIJING, CHINA - FEBRUARY 24: Citizens wear masks at food market on February 24, 2020 in Beijing, China. As a virus outbreak, The number of cases of a deadly new coronavirus rose to more than 77,000 in mainland China, and as of today, 2,595 patients have died.

The Yangtze is the primary source of rice in China. The place was destroyed with vast swathes of farmlands amid the COVID-19 lockdowns. At the same time, the domestic pork industry has yet to recover from the devastating African swine fever outbreak that killed the culling of 100 million pigs.

China has filled the food gap increasingly with imports. But the trade and political issues have dramatically affected its relations with the three most essential suppliers: Canada, Australia, and the U.S.

The Chinese Academy of Social Sciences, a top state-run think-tank, released a report on August 17, saying "some people are beginning to speculate whether there is a shortage of domestic food this year... in fact, there is no need to worry."

However, the report added that China's "food shortfall" would increase in the coming years unless major agricultural reforms are taken for action. The state media have also reported that grain farmers are hoarding stocks that trouble the market supplies.

Li Guoxiang, a researcher with the Rural Development Institute, said to AFP that China's resources are not enough to support the upgraded food consumption structure.

In Chinese culture, big meals are ingrained and usually involve multiple dishes to impress their guests or please their business partners. But the consumption increases along with the standard of their lives, as per MSN.

With food inflation jumping more than 13 percent this year in July, the prices rose tremendously and surged more than 11 percent in June and 15.5 percent in May.

According to government figures, the prevalence of obesity increased more than three-fold from 2004 to 2014. Besides, China has wasted enough food to feed a country the size of South Korea yearly.

Conspicuous consumption has become a platform to be famous for bizarre live stream phenomena that viewers watch people binge-eat.

This week, an AFP journalist in Shanghai, China, witnessed a coffee shop confrontation as a woman called out another customer for leaving a nearly intact sandwich.

In Shanghai, an AFP journalist watched as a confrontation developed in a coffee shop this week after a woman called out another customer for leaving behind a nearly intact sandwich. The incident happened while having a nationwide campaign wherein diners are urged to order less.

While the binge eaters are going to ground, buffet restaurants are obliging customers to pay forfeited deposits if they leave their food.

Woman Spreads COVID-19 at Starbucks: Surprisingly, No Employees Got Infected