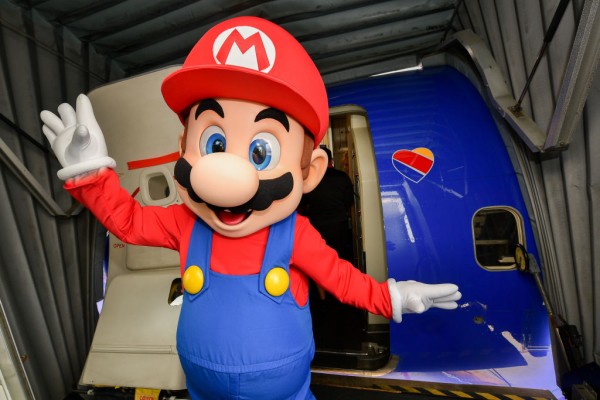 (Photo : Matt Winkelmeyer)
Mario poses for a photo for the Nintendo of America and Southwest Airlines Partnership at San Diego International Airport on July 17, 2019 in San Diego, California.

Having a theme park inspired by your favorite childhood game Super Mario can be considered a blessing made possible when Universal Studios Japan announced that their Super Nintendo World would open on Feb. 4, 2021.

It gets even better when the company announced the game itself would inspire its roster of foods available inside the theme park. According to Tech Beezer, the tasty options vary from sweet and unusual combinations of flavors and cultures that promise to strengthen one's taste buds.

Apart from the menu items the company has released, Universal Studios included Kinopio's Café, which according to Geek Culture, is modeled or inspired with the Toad House in the game franchise.

The Nerdist adds that apart from Kinopio's café, the Yoshi's Snack Island will also be opened in the theme park where the menu encompasses Mario-themed foods, particularly finger food and go-to snacks that you can eat while exploring the whole Nintendo Land.

Have you ever wondered how the Koopa Shell taste like? Well, that may come to reality because, according to the Tech Beezer, Yoshi's Snack Island will be offering food inspired with the Koopa shell packed with yakisoba and cheese.

Geek Culture adds that if you ever get thirsty, Yoshi's Lassi will do the trick with flavors many will like, such as cantaloupe, rockmelon, and mango.

If you are in for quite savory and heavy meals, then you should head to Kinopio's Café. Geek Culture notes that their menu features Super Mario Pizza Bowl that is served with a crispy pizza cap shaped like a mushroom placed over a bowl of tomato sauce with mushrooms and bacon.

Geek Culture furthers that this café inside the theme park also offers the Piranha Plant Caprese with tomatoes, mozzarella cheese, and fresh basil; Mario's Bacon Cheese Burger with pecorino cheese and mushrooms; and for dessert, they offer the block tiramisu shaped after the question mark blocks in the franchise.

The Nerdist also stresses that the theme parks have Pancake Sandwiches with sweet fruit flavors and cream inside as filling, inspired by Mario and Luigi themselves. It also notes that fruit sodas inspired by Mario, Luigi, and Princess Peach are available in the theme park to give the visitors a quench during their visit on a hot sunny day.

Geek Culture shares that Mario Café and Store is among the list of concept diners inside the theme park that is not yet releasing their roster of foods that people might enjoy during their visit to Super Nintendo World.

Recently, IGN notes that the Super Nintendo World's website is now available for viewing online that features the theme park's interior layout and additional information about the dining options, activities, and rides the theme park will be offering.

Timeout notes that the entire park is a game noting that every location within the theme park is highly interactive. With the opening of theme parks like Super Nintendo World, foods that will accompany you in your visit will fulfill the overall experience of a dream's fan of walking in their paradise.