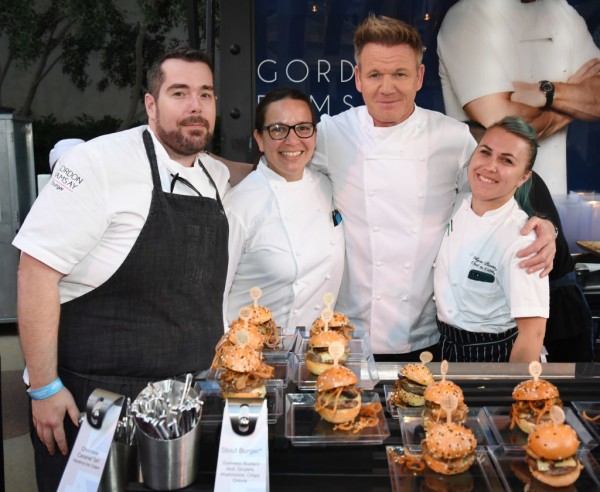 When it comes to taste testing and food review, Chef Gordon Ramsay may be one of the most reputable in the food industry to do the job. He usually does in his shows is reviewing restaurants in their entirety, also the specialties they offer to the people just like what he did with the famous pricy burger in Las Vegas, which he described as disgustingly expensive and bloody delicious.

With an expensive burger, who will say that a favorite can be as sophisticated and deluxe as what Burger Brasserie offers, which was featured on Ramsay's tv show entitled American Roadtrip.

In their episode of the American Road trip, Ramsay and his co-hosts try a burger, which according to him, is of absolute class. MSN notes Ramsay's words describing the burger to be made with an American wagyu patty, lobster meat, foie gras, pancetta, American goat cheese, and a 100-year old balsamic vinegar.

Yahoo! News adds that after tasting the burger, Ramsay and his co-host Gino D'Acampo notes that the burger is delicious, stating that the lobster and foie gras compliments each other, which according to them, is unexpected.

With the ingredients this burger features, you might think that explains why this burger is top of the line when it comes to its price. However, Insider notes another co-host, Fred Sirieix's words saying that the taste was alright, but he doesn't seem to compute the price and the taste.

MSN furthers that the burger comes with a Dom Perignon Champagne, which raised Ramsay's eyebrows, saying that pairing them together is sacrilege. The bottom line, Yahoo! News notes that Ramsay exclaims that no one does it bigger than Burger Brasserie when it comes to burgers.

Apart from the roster of their menu, Luc Life adds that the service in this restaurant is also A plus which they describe that the restaurant's crew is on the level of any fine dining restaurants in Las Vegas because they are very attentive to their customers to the point that they have multiple people taking care of you.

With Gordon Ramsay's approval of Burger Brasserie's $777 burger, people in Las Vegas will now be convinced that what they pay is worth it. If you are in the area, you may try this burger and taste it for yourself if it tastes 777 US Dollars.

WATCH: A review of A $4 Burger vs $777 Burger from BuzzFeedVideo