Is It Safe to Use Microwave? Here's How Radiation Actually Affects Your Food

TAG:Microwave, is it safe to use a microwave on food, microwave and nutrients, microwave to radiation 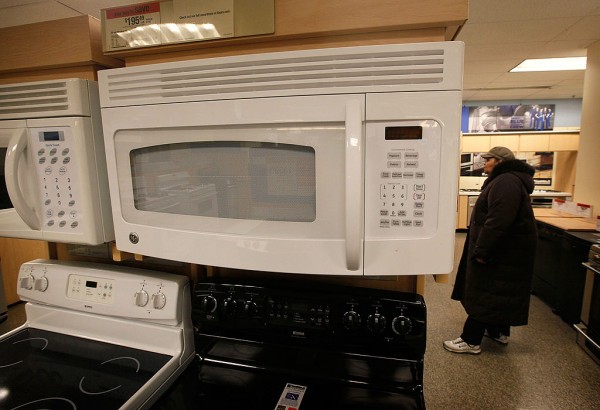 (Photo : Scott Olson)
A microwave oven made by General Electric Co. (GE) is offered for sale alongside other appliances at a Sears store January 22, 2010 in Chicago, Illinois. Today GE posted a 19% slump in fourth-quarter earnings, but still beat Wall Street expectations.

Technology has blessed us with such beautiful innovations that shortens the amount of time required a chore has been demanding. One of the duties that need so much work and attention is cooking, which, apart from time, also requires so much energy.

One device or innovation that has helped housewives with their cooking chores is often debated if it is safe to use microwave for food.

According to the World Health Organization (WHO), microwaves are high-frequency radio waves and is part of the electromagnetic spectrum like visible light. They add that aside from its use in TV Broadcasting, WHO notes that microwaves are utilized in the kitchen to cook or to reheat food.

Microwaves are handy, especially if you do not have the luxury of time like you're in college or have many other responsibilities that need more attention.

An ongoing debate between the pro users and those in the culinary institutions. Concerns about radiation are the leading cause of people's worry about utilizing the microwave to its potential.

BBC notes WHO's a reminder that there is nothing to worry about the microwave's radiation when used correctly. Healthline adds that the microwave produces non-ionizing radiation similar to what the cellphones emit (the microwave has stronger emission only).

They also point out that light is also electromagnetic radiation making it clear that not all radiation is harmful.

They note that the difference between the two is that the microwave energy pierces more in-depth into the food, reducing the heat's time to disperse throughout the food.

Is it safe to use a microwave on food?

Basing on the two most concerning aspects of utilizing microwaves among people, it is generally safe to say yes, the allegation of radiation and nutrient reduction among foods are not true, making it an ideal method of cooking if you do not have the time.

The use of plastic containers in your microwave should not be practiced because many plastics contain hormone-disrupting compounds that can cause harm to your body in the long run. BBC adds that when heated, these plastic additives can melt and mix with the food.

Another reminder that WHO wants to give is that the slices of food cooked in microwave should be a little bit thinner than the traditional oven because the microwave energy cannot penetrate thicker foods that may give you an unevenly cooked meal for your dinner.

A device like microwaves can be convenient, although cooking food can raise a concern if it is safe to use microwave with food. To be safe, using it for an emergency is ideal and allotting time to cook is still the safest way to give a healthy meal to your family.

WATCH: How Does a Microwave Oven Work? From engineerguy