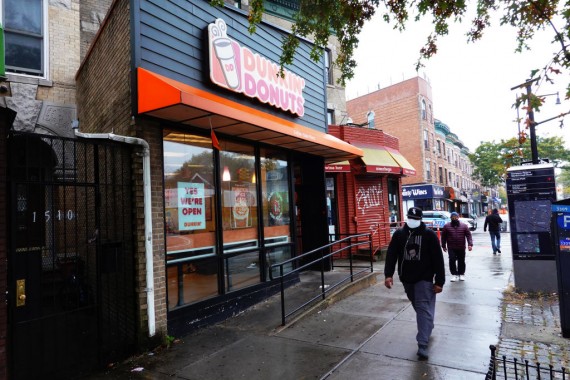 Food waste has been an on-going issue for many years, and it seems to be getting worse. Recently, Dunkin gained attention because of a food policy that was exposed via TikTok and caused an uproar from fans.

According to Yahoo News, Dunkin apparently throws all leftover foods after closing the shops. The company's policy also does not allow leftovers to be given to employees or be donated.

Bryan Johnson, a Dunkin employee, took to TikTok to show viewers how the company deals with food left on its shelves. Johnson revealed all these on his TikTok account @bryanjohnson_, where he showed over 300 donuts thrown away before the shop closed.

Johnson stated that they throw tons of donuts away even if these are still in perfect condition to be consumed. He added that there were instances that he could bring some home, but the standard practice is to dispose of everything.

As a result of Johnson's video posted in TikTok, many commenters were appalled by the company's practice. They said it is better to donate leftover food rather than throw them away.

Johnson himself felt motivated to do something to get Dunkin to change their policy, but he also knows that it is not that easy to do.

Johnson explained that employees are allowed to take some of the leftovers before throwing them away, according to his manager. However, it is impeccable that they use discreet bags or boxes without the company's logo. He said that in this way, they can still give it away to the homeless without the risk of getting sued.

Read also: TikTok Users Are Obsessing About Swig, And Here's Why

The Risk Of Donating Food Waste

Although Dunkin is getting backlash because of its policy regarding food waste management, it seems like they are not the only ones doing this. Most food establishments opt to discard leftovers rather than donating them because of the fear of getting sued.

According to a HuffPost report, professor and director of the Food Recovery Project, Nicole Civita, said at present, there are no records of anyone in the United States being sued due to harms related to donated food.

Passed in 1996, the Bill Emerson Good Samaritan Food Donation Act also protects restaurants from civil and criminal liabilities if a recipient gets ill or hurt due to the consumed donated food. However, even with this in place, most food establishments are still hesitant to change their food waste management policies.

About 56 percent of large restaurants expressed concerns about donating food, as shown in a survey conducted by the Food Waste Reduction Alliance in 2014.

Although it may take some time for these food establishments to change their ways, employees like Johnson are determined to make a difference in their own ways, however small they may be.