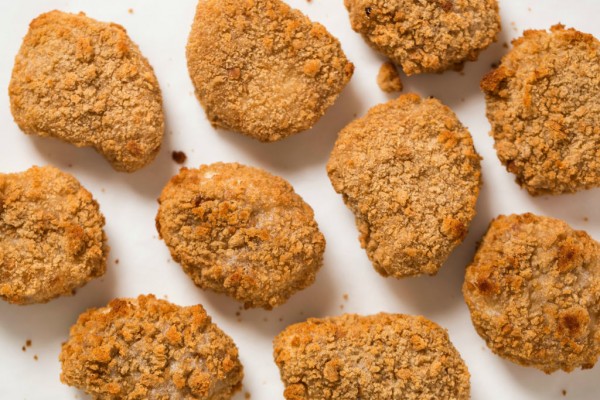 (Photo : Dan Kitwood)
A photo illustration of Chicken Nuggets on February 16, 2018 in London, England. A recent study by a team at the Sorbonne in Paris has suggested that 'Ultra Processed' foods including things like mass-produced bread, ready meals, instant noodles, fizzy drinks, sweets and crisps are tied to the rise in cancer.

Plant workers are often enclosed in a facility while doing their job, of course, with safety precautions. However, that changes when about six plant workers lost their lives, and 11 of them were injured when a line that carries liquid nitrogen breaks at Foundation Food Group in Georgia.

According to Star Tribune, the plant takes raw chicken. It processes them into products like chicken fingers, individual chicken cuts marketed to different restaurants, including food service operations, partially cooking them, and then freezing them again for later use.

In a news conference, vice president of human resources from Foundation Food Group, Nicholas Ancrum, shares with Eat This Not That, saying that preliminary indications are that the line's rupture causes the tragic accident inside the facility.

Ancrum furthers that the lives lost in the catastrophe include maintenance, supervisory, and management team members. MSN references The New York Times, stating that five victims were found unresponsive at the scene.

nother one loses the last breath after being transported to Northeast Georgia Medical Center situated in Gainesville.

Ancrum also shares with Star Tribune that every team member is equally important to them and their sympathy stays with the victims' families and communities who suffered the devastating loss.

The firefighters arrived at the scene around 10:12 in the morning and found that most of the plant workers already evacuated, and 130 employees were moved to a nearby church for a medical evaluation.

Effects of the accident

Star Tribune reports that 11 people are treated for respiratory symptoms at the hospital, including three in critical condition. Health system spokesperson Sean Couch shares with Star Tribune that five plant workers are in fair condition, and three of them are already being treated and released.

Ancrum exclaims in MSN that the Foundation Food Group takes workplace safety very seriously and continues to adopt and implement the most effective safety programs and protocols in the industry.

He also notes that until the investigation is not yet completed, their part cannot say with utmost confidence precisely how the accident happened or occurred in the facility.

Star Tribune notes that the plant's previous safety violation did not identify any problems with its refrigeration system. They further that OSHA has cited four violations the plant has committed in the past ten years, noting that the most serious was in September 2015, when they fail to make sure their machines are appropriately safeguarded while maintained to avoid injuries.

The recent Nitrogen leakage in the Foundation Food Group in Georgia serve as a lesson to all the companies in maintaining and checking their machines that can pose a hazard to their employees.

However, this is not the first time this kind of tragedy occurred in a chicken processing plant in the United States concerning their plant workers' lives.

Related article: From Lab-grown Meat And Chicken-less Nuggets: Food Innovations That Will Surprise You

WATCH: An Inside Look at U.S. Poultry Processing from USPOULTRY