You Won't Believe These Top 6 Weirdest Things Found in Food 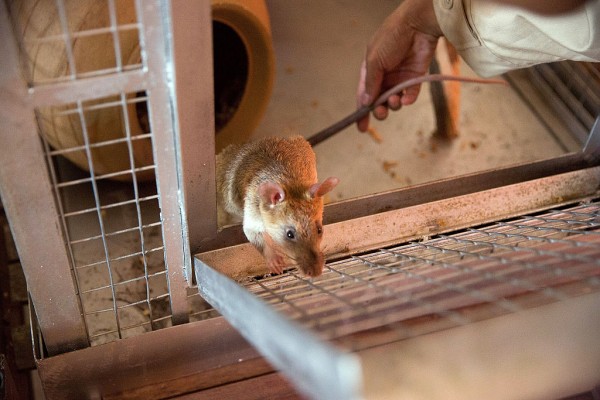 (Photo : Taylor Weidman)
A resident veterinarian performs daily checks of the mine detection rats on July 2, 2015 in Siem Reap, Cambodia.

Whether you are out of energy or you just want to grab a bite, foods may always be by your side to get you through the day. Even if the weirdest things happened throughout your day, comfort food would be there to save you from those moments. But will you feel if you see something weird on your food after biting into them?

Although this may gross you out, the time has attested that some strange things or even animals may come with your favorite food. Still not convinced? Here are the weirdest things that were found in foods that may gross you out.

Read also: The Weirdest Food You Can Find in US

If you love producing, you must take a better look if a dangerous insect is lurking in them since vegetables and fruits grow in the great outdoors.

Cheat Sheet shares that a family from New Hampshire discovered a clack widow spider within a package of organic grapes. With venom 15 times than a rattlesnake, you would not want a black widow on your food.

Frog in a bag of frozen veggies

Spiders and insects come inside the product's packaging. Sometimes frogs maybe even present to say hello.

In a report by Eat This Not That, a family from Michigan discovered the frozen amphibian in 2010, after opening the bag of frozen vegetables. They add that the family contacted the FDA, but they got no response. Eventually, the vegetables were recalled.

Mouse in the Bread

Babble Top shares that a man from the United Kingdom discovered a mouse in his loaf of bread when he is ready to make his sandwich. They add that the mouse seems to be baked in the bread factory.

The family did not eat the mouse; however, the family has already eaten several slices from the same loaf. Babble Tap shares that the man filed a complaint, and the company fined a total of 5,500 pounds.

Who will not love the creamy and rich texture of chocolate unless it has maggots in them, just like what happened to Rachel Vile.

According to Cheat Sheet, Vile posted pictures on her social media page in Ferrero Rocher's box infested with maggots. They add that half of the chocolates are done before the creepy crawlers are discovered.

Mouse in a curry jar

The mouse may be a very curious animal that sometimes their curiosity leads them to their demise and the people's panic attack.

Eat This Not That reports that an Englishwoman brought a tikka masala sauce that seems a little lumpy, and when she took a closer look, it was a rodent. They add that the grocery promises that the matter will be investigated.

Cockroach in a Hash brown

While hash browns may be the best thing you can have during breakfast, one customer may have thought of it as a nightmare when a cockroach was seen inside the potato cooked.

Babble Top shares that the customer already ate half of them has brown before realizing a friend cooked inside it. They add that the fast-food chain responsible offered a coupon for one free breakfast.

The weirdest things found in foods may serve as a lesson to everyone that you might want to thoroughly check it to avoid regrets before consuming your favorite food. Remember that health and safety shall be your priority, so make it a habit to check your food even if you are very hungry.

Is Your Child in Danger? Experts Explain Truth About Heavy Metals in Baby Foods

National Pizza Day 2021: Here Are the Best Pizza Deals and Freebies You Can Get