Tobacco Use on Teenagers Can Be Reduced If Tobacco Displays Can Be Hidden, Study Reveals

A new study finds that given the fact that tobacco ads and products are kept out of sight, teenagers may be less likely to buy cigarettes in convenience stores.

As per RAND Corp. researchers, hiding cigarettes and other tobacco products could possibly induce a great decline on teens' risk of trying these products, especially in the future

In a press release of RAND, William Shadel, the senior behavioral scientist of said nonprofit organization, claimed that the findings recommend limiting the visibility of tobacco displays in retail stores as it might lessen the number of people who uses cigarettes.

Shadel and his colleagues also found that the tobacco "power walls" which can usually be seen at retail stores have largely replaced tobacco advertising, such as in magazines and on billboards. And, as these walls display hundreds of tobacco products, branded posters, product slogans and prices, it can easily be seen behind the cashiers. 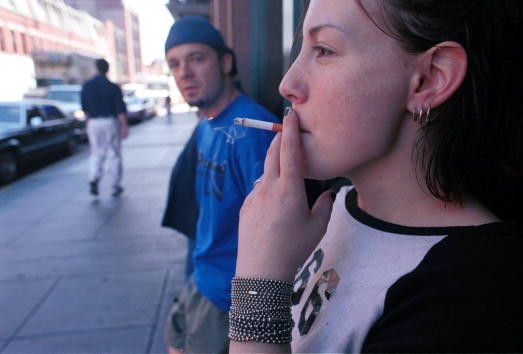 As researchers conduct their experiment, they tried to recreate a fully stocked convenience store and built the tobacco walls on it. The wall was situated in one of three locations: on a side wall far from the cashier, behind the cashier, or hidden behind a screen.

In the said research, a total of 241preteens and teens, between 11 and 17 years old, were informed that will they be a part of an experiment which studies the teen drugstore shopping habits. Each teen was randomly selected to be a part of the three groups, each in a "store" with a different power wall location, and each member of the group were given $10 to spend in whatever they like in the store.

In the journal Tobacco Control, where the study was published on Nov. 23, it was found that if tobacco walls were hidden, it lessened the cigarette susceptibility by 11 percent. However, if the tobacco walls were moved to a less-obvious location, it showed no impact on the teens' risk for smoking.

Currently, when it comes to a point-of-sale tobacco advertising, the experts also claim that public health officials can consider these findings when making policy decisions.