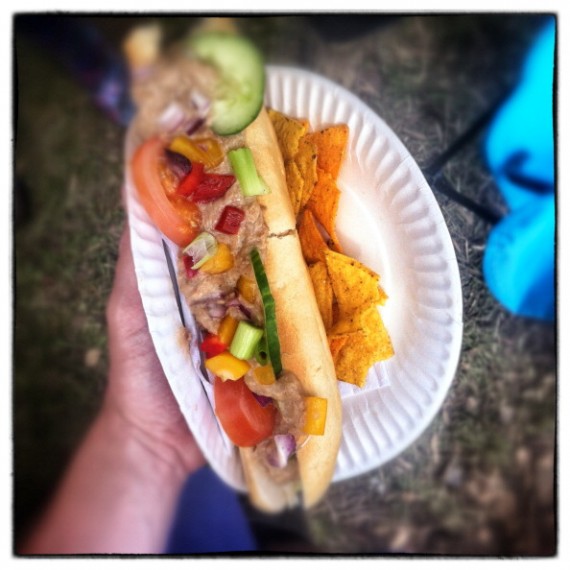 A tuna salad baguette for sale for £5.50 from the Le Pain Baguette food stall is seen at the Glastonbury Festival on June 29, 2014 in Glastonbury, England. Environmental Working Group (EWG) says that some tuna varieties contain high amounts of mercury and should be avoided.
(Photo : Matt Cardy/Getty Images)

A recent study by the Environmental Working Group (EWG) titled "U.S. Fish Advice May Expose Babies to Too Much Mercury" said that it may be risky to adhere to the federal government's recommendations on seafood and mercury, potentially resulting in women consuming excessive amounts of the wrong type of fish.

Warning that pregnant women and nursing mothers should eat fish with low mercury contamination, the guidelines offered by EWG said that their experiments have revealed that mothers consuming fish species in the amounts recommended by the FDA and EDA may expose the fetuses to the detrimental effects of mercury, Food Poisoning Bulletin reported. It is strongly advisable that they should not eat shark, swordfish, king mackerel, or tilefish, as these all contain high levels of mercury.

Irrespective of being a man or a woman, one should always bear in mind the precise amount of fish you can consume safely. However, this amount depends largely on the gender, weight, and whether an individual is suffering from heart disease. Therefore, it is advisable to check the EWG's handy Seafood Calculator to determine what's right for you, Thrillist suggests. Below is a list of fishes you need to avoid as much as you can.

Although swordfish can be sustainable depending on its source, you should avoid consuming it, as one serving of this fish comprises 211% of the utmost amount of mercury you should consume per week.

While consuming black and stripped sea bass once a week is safe provided you don't eat any other sea fish, the Chilean sea bass, earlier known as Patagonian toothfish, should be avoided. This fish contains a modest amount of omega-3s, but it also contains 86% of the safe amount of mercury one can consume in a week.

Fortunately, all types of tuna do not contain mercury. For instance, canned albacore tuna is loaded with omega-3s and is safe to eat once a week provided you don't eat other seafood. However, only a serving of 4oz contains 81% of the amount of mercury that's safe to consume in a week. Hence, consume it in limited amounts. However, avoid bluefin and bigeye tuna.

The Atlantic tilefish contains moderate amounts of omega-3s, and you can eat it twice a week provided you don't eat any other seafood. However, tilefish from the gulf is probably harmful. A serving of 4oz provides with a whopping 345% of the maximum weekly mercury allotment.

Avoid consuming all types of marlin, including the blue, striped, or simply plain ole varieties. Also, avoid the Florida Marlins. Aside from providing a modest amount of omega-3s, this fish contains loads of mercury, especially blue marlin. On serving provides with 604% higher than the utmost amount of mercury that one should consume in a week.

This fish contains a reasonable amount of omega-3s, but one serving of 4 oz provides 261% of the maximum weekly mercury allotment.

EWG suggests that you should avoid this fish because a 4oz serving of it supplies 119% of one's maximum allowed mercury consumption in a week. Moreover, it does not provide enough omega-3s.

In addition, it is recommended that you strongly avoid orange roughy and shark.

How to Properly Grill Fresh Corn Without Burning It