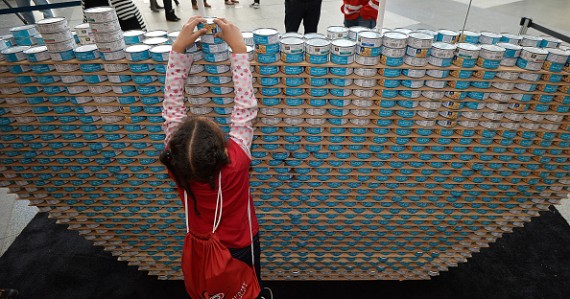 RALEIGH, NC - JANUARY 10: Youth from the Kids Cafe afterschool program join with CanStruction, Carolina Hurricanes hockey player Nathan Gerbe, CEO Bill Humphries and Merz employees to construct a Merz Logo made entirely of canned food during the company's National Sales Meeting at the Raleigh Convention Center on January 10, 2016 in Raleigh, North Carolina. The structure, which is approximately 10 feet wide and made of 5,000 blue and white tuna cans, will be distributed to The Food Bank of Central and Eastern North Carolina to help feed over 1,700 people.
(Photo : Grant Halverson/Getty Images for Merz)

Canned tuna has been a favorite staple by bodybuilders and people looking for cheaper seafood alternatives. Admittedly, fresh tuna has always been more expensive than its processed and preserved versions. However, the latter can be as healthy, thanks to it possessing a number of essential nutrients.

The United States has always been one of the world's leading consumers of canned tuna. However, the question still remains: which is healthier, the ones in oil, or the ones in water/brine? Making the right choice between the two can greatly impact your diet in the long term. Note that both types of canned tuna are high in protein content, though are relatively low in calories.

With that said, let's compare both!

Seafood is rich in sodium - canned tuna is no exception. If you're asked by your physician to avoid high-sodium food, then your best bet would only be to consume tuna in oil - a whole canned of which contains 517 milligrams of sodium, which is 22% of your daily intake limit. Meanwhile, tuna in water is slightly higher at 520 milligrams.

If you're on a diet and trying to lose weight, canned tuna is definitely for you. A three ounce serving of tuna in water possesses a measly 109 calories. Tuna in oil is comparably higher by a small margin, with 158 calories per three ounces serving.

Both oil and water versions contain 20 grams of protein per three-ounces serving, putting them at a tie. This amount is also half of a normal person's protein content requirement. With that said, this makes it a must if you're looking to bulk up. Thanks to its relatively low-calorie content, you wouldn't have to worry about extra weight being gained. That being said, its high protein content means that it can be a huge factor in muscle growth and development.

So, which is healthier? There is relatively little difference between the two, even in the fat department: both contain a good amount of healthy fat, like omega 3. Regardless of your choice, you'll be able to enjoy and reap its benefits.