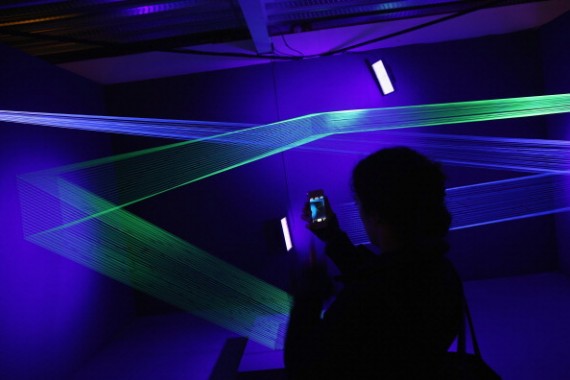 LONDON, ENGLAND - FEBRUARY 28: A visitor takes a photograph of a piece of work entitled 'Linea UV Drawing' by artist David Ogle during the Kinetica Art fair on February 28, 2013 in London, England. The event is the UK's only art fair dedicated to kinetic, robotic, sound, electric and new media based art, and runs at the Ambika P3 on Marylebone Road until March 3, 2013.
(Photo : (Photo by Dan Kitwood/Getty Images))

In this age, technology comes in all shapes and sizes. Gadgets are designed to make life easier. At the same time, these gadgets are created in compact and concise dimensions. Just like the new water testing kit that is made in the form of a typical smartphone cover.

According to Treehugger, Mitra has had a lot of headline-worthy inventions, but his water treatment smart phone cover is more than just another fad. They even said it could save lives "because it's a smart phone cover that can test water as well as test and treat contaminated liquid food".

The University Post said "The idea is that you scan the food using the phone camera and a UV light, revealing potentially harmful microorganisms. A UV lamp on the phone cover can then treat the water - effectively transforming it into a device to treat food and water contamination".

Treehugger then further explained how it works "first, you scan your food using your smart phone's camera, in near-darkness and under blue light, and then an app that Mitra has developed reveals anything that shouldn't be there - from impurities such as glass or sand to potentially dangerous microorganisms like listeria and cholera. Then you use the UV lamp to zap any bacteria. Scan your food again to determine if it's safe to consume". And yes, Mitra's invention works on food as well.

The main components of Mitra's device are UV lamp and a blue filter used as a cover. And it is also equipped with a solar panel.

Mitra's dedication in developing this tool comes from his desire to help Asian nations or third world countries where safe water is more difficult to find. "The tap water in Europe is safe to consume but in a South Asian context it is not. The smart mobile cover that I made is specifically relevant to nations like India, Bangladesh, Thailand, Vietnam etc. Street side stalls, eateries and even tap water can be unsafe because of unhygienic conditions...It's an everyday problem for millions of people." Mitra told The University Post.

Currently, only a prototype of this smartphone cover is available but a telecommunications company has already showed interest Mitra's invention.

How A Food & Wine Festival Is Helping To Shift The Narrative Of A Former Spring ...