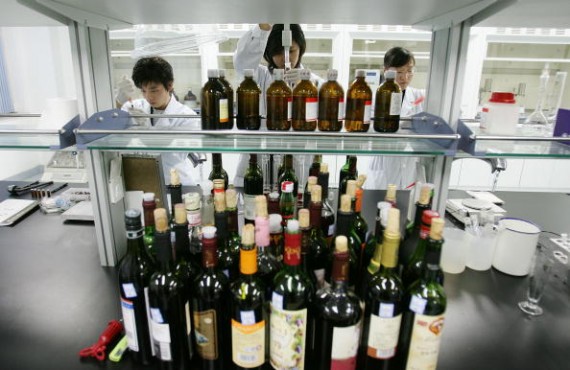 BEIJING - MARCH 30: Staff work in a lab of Beijing municipal centre for food safety monitoring on March 30, 2007 in Beijing, China. The centre was created under the Beijing Food Safety Administration in 2004 to provide technical support for safety tasks in Beijing and 2008 Beijing Olympics and it also carries tasks related to Olympic Food Safety monitoring and application of food safety techniques.
(Photo : Guang Niu/Getty Images)

In the United States, the Centers for Disease Control and Prevention estimate that each year, 48 million Americans, roughly one out of six, get sick from foodborne diseases. At least, 128,000 are hospitalized, while 3,000 deaths occur annually.

Food safety is an important issue, considering that bacteria like salmonella and e.coli can cause debilitating ailments while organisms like amoebas can do the same. You can never be sure of the food you stuff in your mouth. As they say, prevention is always better than a cure - and the people of the Korea Advanced Institutes of Science and Technology looks to provide just that.

Detecting contaminated food, or the bacteria crawling all over them, is a difficult and expensive process. Some methods include microbiological culturing and mass spectrometry. And yes, these require highly skilled professionals to perform.

However, Jonghee Yoon and his companions at the above-mentioned institute have discovered a method which lets you find bacteria on various foods' surface in a matter of seconds. The method uses a laser, which detects the movement of certain bacteria on the surface of contaminated food. Take note that the microorganisms move around the surface of whatever they are in using various methods. For example, salmonella does this by using a hair-like flagella.

Yoon and his companions tried out the laser on various experiments, notably on a chicken breast test subject. The whole experiment, detailed in this image, showed the results and effectiveness of their work. Additionally, the technique does not require the laser to be in contact with the meat, so it can be done at a distance.

We can safely say that this laser may change the way the food industry does things and it may also further improve food hygiene in the long run.